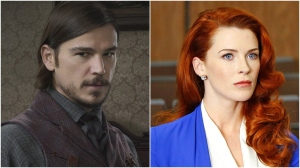 Penny Dreadful star Josh Hartnett is set for a return to the small screen, with THR reporting that the actor has signed on to Paradise Lost, a ten-episode drama series from Spectrum Originals and Paramount Network, which will see him leading the cast alongside Bridget Regan (Jane the Virgin).

Created by Rodes Fishburne (Blood & Oil), Paradise Lost will follow “a psychiatrist (Regan) who moves with her family from California to her husband’s (Hartnett) hometown in Mississippi, only to uncover shameful secrets that irrevocably change the lives of everyone involved.”

Joining Hartnett and Regan in the cast of the series are Barbara Hershey (Once Upon a Time), Nick Nolte (Gracepoint), Gail Bean (Snowfall), Danielle Deadwyler (The Gifted) and Shane McRae (Sneaky Pete). Fishburne serves as co-showrunner with Arika Lisanne Mittman (Dexter), while John Lee Hancock (The Blind Side) executive produces and will also direct the pilot.

“Paradise Lost is a complex, compelling series full of incredible characters, including the small town in Mississippi where it is set,” said Paramount Network executive Keith Cox. “We’re excited to see John Lee Hancock bring this incredible world to life, building on the vision that Rodes Fishburne and Arika Lisanne Mittman have so vividly created.”