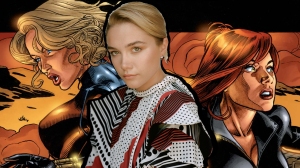 Marvel Studios has always been notoriously tight-lipped about its projects, but never more so than with Black Widow. So fans must instead turn to photos and glimpses of the locations where star Scarlett Johansson has been spotted filming — the latest being, fittingly, Budapest. But while new set photos that have emerged from the Budapest set don’t reveal what Hawkeye and Black Widow were talking about when they referenced the city in previous MCU films, they do potentially reveal the identity of Johansson’s new Black Widow co-star Florence Pugh.

Both Johansson and Pugh have been reported to be spotted filming in Budapest, a city with a long history in the Marvel Cinematic Universe. But what new set photos from the filming location reveal aren’t hints at all those glib references between Hawkeye and Black Widow, but a revelation of the identity of the new character played by Pugh.

New images shared by Twitter account Best of Widows give us a look at some crates for the set dummies for Pugh and Johansson. Whoa, hold your horses, you may say. Dummy crates? Let’s not get too crazy! While dummy crates aren’t usually anything to report over, the tantalizing element about them is the labels on these dummy crates. Those labels read “Natasha,” likely for Natasha Romanoff, and “Yelena.” This name could refer to Yelena Belova, a Marvel Comics character long connected to Black Widow.

In the comics, Yelena Belova was a fellow Red Room spy and assassin who had ties to Hydra, S.H.I.E.L.D., and Vanguard. Originally introduced in 1999 as a foe to Natasha Romanoff, Yelena later becomes her ally and even at one point goes on to hold the title of Black Widow. This isn’t the first time that an MCU character has been theorized to be Yelena: Agent Carter’s trained assassin Dottie Underwood (Bridget Regan) was thought to be the character due to her ties to an early version of the Black Widow program. But if this film is a prequel as it likely is, Yelena appearing as a pivotal part of Natasha’s backstory makes a lot of sense — though there will likely be some fudging of the character’s original arc. I would wager we’ll see Natasha and Yelena as close friends (or enemies) trained in the Red Room together, until Natasha defects and Yelena is sent to kill her.

Black Widow is being helmed by Cate Shortland, with a script from Jac Schaeffer and Ned Benson. Johansson is joined in the cast by Florence Pugh, David Harbour, and Rachel Weisz. Filming is underway and expected to last until September. No release date has yet been announced.