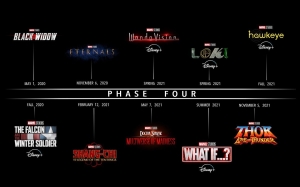 While two-time Oscar winner Mahershala Ali was revealed to be the new Blade at Marvel Studios’ highly anticipated Hall H panel at San Diego Comic-Con 2019, fans will have to wait a bit to see him onscreen. Marvel Studios president Kevin Feige took the Hall H stage on Saturday to announce that with the release of Avengers: Endgame and Spider-Man: Far from Home, the “Infinity Saga” is now complete. That consists of every movie made from Iron Man through Far from Home, which means it’s now time to enter a new era of MCU storytelling: Phase Four.

As part of Marvel’s Hall H panel, Feige announced the upcoming films Black Widow, The Eternals, Shang-Chi and the Legend of the Ten Rings, Doctor Strange in the Multiverse of Madness, and Thor: Love and Thunder as well as the Disney+ limited series Hawkeye, WandaVision, The Falcon and the Winter Soldier, and What If… ? As it turns out, this entire slate of movies and TV shows will complete Marvel’s Phase Four.

Collider’s own Steve Weintraub caught up with Feige backstage after Marvel’s Hall H panel this year, and Feige confirmed that the upcoming Blade reboot will not be Part of Phase Four, which will consist of everything that was announced on Saturday:

So yes, that means all the films and Disney+ shows mentioned above is the complete Phase Four. For now. If you’ll recall, back when Marvel announced its complete Phase Three in 2014, it didn’t yet include both Spider-Man movies or Ant-Man and the Wasp, the Inhumans movie slated for November 2018 was later removed from the schedule, and Avengers: Infinity War – Part 1 and Part 2 were later renamed Infinity War and Avengers: Endgame. As a result of adding two Spider-Man movies and an Ant-Man sequel, the release dates for the back half of Phase Three shifted a bit, but other than that Marvel stuck pretty closely to its schedule.

So that means Phase Four will only last two years (as opposed to the four-year Phase Three) and will end with Thor 4 and the Hawkeye limited series in 2021. It also means that confirmed sequels like Guardians of the Galaxy Vol. 3, Black Panther 2, and Captain Marvel 2 are still a ways off and won’t be coming in Phase Four, along with the Blade reboot which so far only has Ali attached—no announced writer or director.

It’s interesting that Marvel’s Phase Four is only two years long, but it is the first MCU phase to officially, fully include TV shows as an element. The Marvel Netflix shows and ABC series were never under Feige’s purview and thus were only tangentially connected to the MCU, but the Disney+ shows are being created with Feige and the Marvel Studios team overseeing everything, and he has explicitly stated that they will tie directly into the story being told in the films.

So to recap, here’s all the Marvel Phase Four movies and TV shows and when they’re being released, according to Feige: