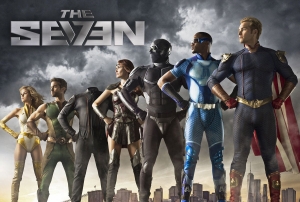 We are so, so close to the premiere of The Boys on Amazon and the streamer has gifted us with yet another trailer. Thankfully, this final trailer for The Boys features some new footage, including the first look at Simon Pegg‘s character and a closer look at the conflict between The Boys and The Seven.

The focus of the final trailer for The Boys is all about audience surrogate Hughie Campbell (Jack Quaid) becoming a member of the titular superhero management task force led by Billy Butcher (Karl Urban). Hughie loses his girlfriend, Robin, in a gruesome, tragic accident involving A-Train (Jessie T. Usher), The Boys‘ answer to The Flash. From there, Hughie meets with Billy, who offers him a spot on his team as a way to serve some serious karmic payback to the supers who are drunk on their own power. In Billy’s words, The Boys are there to “spank” the superheroes whenever they get out of line — and that seems to happen a lot, if this final trailer is anything to go by.

But the trailer also offers the first look at Pegg’s character, Hughie’s dad. He’ll be appearing for four of the nine episodes that make up season 1. Hughie’s dad seems like a well-meaning guy but his consolations are nothing to keep Hughie’s anger at the superheroes known as The Seven, the superhero group in direct opposition to The Boys led by an off-brand Superman known as Homelander (Anthony Starr).

Of course, the trailer is also very NSFW so make sure you listen with headphones if you’re enjoying it while you’re out and about. And you should enjoy it ASAP because The Boys, dear Reader, is going to rule so hard when it finally arrives and it’s your civic duty to prepare for its arrival as best you can.

The wait is almost over as The Boys prepares for its premiere on July 26. Check out the final trailer for Amazon’s nasty superhero series below.