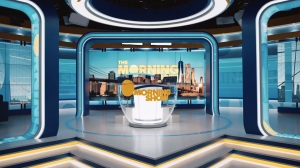 Apple TV+ has released the first The Morning Show teaser trailer. It contains no footage from the show but audio from the three lead characters played by Jennifer Aniston, Reese Witherspoon, and Steve Carell. Rather than leaning towards something light about morning television like Morning Glory, the teaser hints at something far more dramatic with characters demanding to be taken seriously as the character pans across an empty backstage area.

This is the second teaser for an Apple TV+ show following For All Mankind, but so far I remain unconvinced at anything the streaming service is putting together. For starters, they still haven’t announced pricing or availability. Presumably, these shows will only be available through Apple devices, but how much will it cost? Will all the episodes drop at once? How many episodes are we getting of something like The Morning Show? The show premieres this fall and I can’t even tell you if it’s a half-hour or hour-long. I like Aniston, Witherspoon, and Carell, but just having them recite dialogue over no footage doesn’t automatically inspired confidence.

The streaming wars are about to heat up in a big way this fall, and so far I haven’t seen anything to convince me that Apple is ready. The thinking seems to be that because they’ve been so successful at tech, it follows that they’ll be successful at creating content that will in turn help them sell their expensive devices. But that’s like saying because Disney has been successful in entertainment, they’d be successful at making tablets you could watch Disney shows on. Apple needs to stop acting like their own brand is enough to cloak these shows in mystery because people will sign up for whatever Apple does. Make the show itself look interesting. So far, The Morning Show, one of its highest profile programs, doesn’t demand a subscription.

Check out The Morning Show teaser below. The series premieres on Apple TV+ this fall.