Ahead of its world premiere this coming weekend at the Toronto International Film Festival, the first image has arrived online for the upcoming comedy drama Bad Education. Directed by Cory Finley, the film is loosely based upon his own high school experience and features a cast that includes Hugh Jackman, Allison Janney, Ray Romano, and Geraldine Viswanathan. 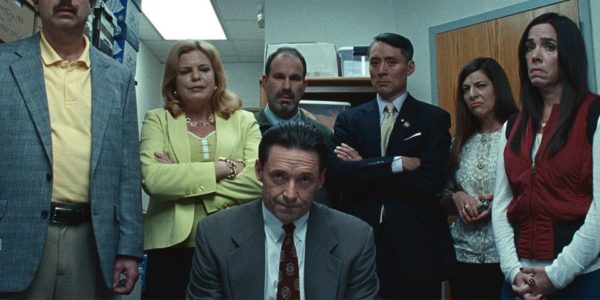 Via TIFF: “Long Island school superintendent Frank Tassone (Hugh Jackman) and his assistant superintendent for business, Pam Gluckin (Academy Award winner Allison Janney), are credited with bringing Roslyn School District unprecedented prestige. Frank, always immaculately groomed and tailored, is a master of positive messaging, whether before an audience of community leaders or in an office with a concerned student or parent. In short, it seems Frank can do no wrong. That is, until a plucky student reporter (Geraldine Viswanathan) decides to dig deep into some expense reports and begins to uncover an embezzlement scheme of epic proportions, prompting Frank to devise an elaborate cover-up — by any means necessary.”