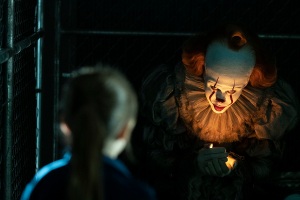 Warner Bros. and New Line‘s It: Chapter Two kicked off the fall box office season with a strong, $91 million debut. The performance easily topped the weekend box office, finishing ahead of the second place film by $85 million. While the performance trails the first film’s $123 million opening back in 2017, it is still within studio expectations and ranks as the second largest horror opening of all-time while 2017’s It remains to be the only horror film to ever open with more than $100 million.

The film did receive a “B+” CinemaScore, which is the same as the original film, though IMDb user ratings tell a different story. Chapter Two is currently rated 7.2/10, a full point below the first film’s 8.2 rating as of the Sunday following release.

In second, Lionsgate and Millennium‘s Angel Has Fallen delivered an estimated $6 million, pushing the film’s domestic cume over $53 million as it enters its third week in release.

Universal‘s Good Boys finished in third with an estimated $5.4 million, dipping -43% as the film’s domestic cume now stands at $66.8 million. Internationally, the R-rated comedy added $2.3 million from 28 markets for an overseas total that now stands at $15.6 million and a global cume topping $82 million.

Disney‘s The Lion King lands in the top five for the eighth straight weekend, bringing in an estimated $4.2 million for a $529.1 million domestic cume. The film also added $13.4 million internationally this weekend for an overseas cume totaling $1.07 billion and a global cume just shy of $1.6 billion as the film now ranks seventh all-time both globally and internationally.

Rounding out the top five is Sony and AFFIRM‘s Overcomer, which added theaters for the third straight week in a row and dipped just -34% for an estimated $3.75 million and a domestic cume that now stands at $24.7 million.

Elsewhere, the best hold in the top ten belongs to Roadside‘s The Peanut Butter Falcon, which added 61 locations and dipped just -24.6% for an estimated $2.27 million three-day, as it moves up from 12th last weekend to seventh position this weekend. The film’s domestic cume now stands at $12.2 million as it enters its fifth week in release

Next weekend will see Warner Bros. release The Goldfinch into 2,500+ locations while STX will deliver Hustlers into 3,100 theaters.