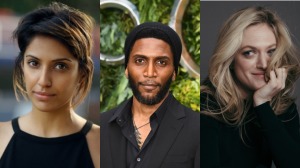 Arya will play Lila, described as “a chameleon who can be as brilliant or as clinically insane as the situation requires. Unpredictable, mischievous and sarcastic, Lila’s gifted with a twisted sense of humor.”

Gatewood will play Raymond, “a born leader with the smarts, gravitas and the confidence to never have to prove it to anyone. He is warm, dedicated and has the innate ability to disarm you with a look. A devoted husband, he’s the kind of guy everyone wants to know.”

Ireland is on board as Sissy, “a fearless, no-nonsense Texas mom who married young for all the wrong reasons. Still in her prime, she’s eager to rediscover what life and love has to offer.”

Production on Season 2 is underway.

Steve Blackman will remain on board as showrunner and executive producer on the series about a set of foster siblings with superhuman abilities. Jeff F. King, Mike Richardson and Keith Goldberg will also return as executive producers, with Way and Bá back as co-EPs.
via The Wrap