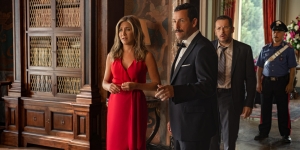 Pack your bags and put on your detective caps because it looks like a sequel to Netflix’s Murder Mystery is in the works. Directed by Workaholic‘s Kyle Newachek and starring Adam Sandler, Jennifer Aniston, Luke Evans, and Gemma Arterton, this 2019 comedy follows Nick (Sandler) and Audrey (Aniston) Spitz, a middle-aged couple who finally take their European honeymoon only to find themselves tangled up in a — you guessed it — murder mystery.

According to The Hollywood Reporter, production on the sequel is still in the very early stages. That shouldn’t come as too much of a surprise since the film hit Netflix in June. Even though the streamer is notoriously tight-lipped about viewership numbers, THR notes that Netflix reports Murder Mystery nabbed 31 million viewers in the first 72 hours it was on the service which is, undoubtedly, the right number to get a sequel greenlit. It’s also pretty darn lucky that there’s actually some fun directions for this story to go in.

Things get interesting while assessing which elements of the first Murder Mystery will carry over into the sequel. THR states that Murder Mystery‘s scribe, James Vanderbilt, will return to pen the sequel. Meanwhile, Sandler and Aniston are expected to return but not formal announcements have been made at this time. It’s highly likely they would, especially with Sandler’s ongoing deal with Netflix allowing for it to happen. However, we should expect an entirely new supporting cast to crop up because, well, like any good Agatha Christie-inspired mystery, you simply must have a new cast with every new story.

Murder Mystery marked the second time Sandler and Aniston had joined forces following their work together on 2011’s Just Go With It. While Sandler has had some hits and misses with his movies in recent years, I can confirm Murder Mystery was actually a fun-as-hell watch. Plus, you get Sandler and Aniston as a perfect onscreen duo and who have some genuinely great chemistry. What’s not to love?

Murder Mystery is currently available to stream on Netflix.