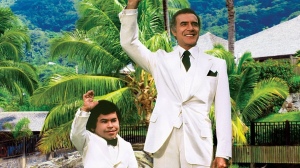 Earlier today, Blumhouse tweeted an image of the first poster for their upcoming Fantasy Island film. The movie is a supernatural horror re-imagining of the classic TV show, in which guests fly out to Fantasy Island to have their ultimate fantasies fulfilled by the mysterious Mr. Roarke.

Can you see it? More on Monday 🏝️ @Fantasy_Island pic.twitter.com/a4eQVVB5t9

The tweet asks “Can you see it?”, which is presumably a reference to one of two things. (Or maybe both things.) First, if you’re at all familiar with the original TV series, you know that a popular catchphrase from the show was “The plane! The plane!” as delivered by Hervé Villechaize, who played Mr. Roarke’s assistant Tattoo. And there is clearly a tiny plane visible in the lower right of the poster. It seems perfectly likely that Blumhouse is poking fun at the Fantasy Island brand.

However, Fantasy Island is a show that premiered over 40 years ago, and it’s unlikely much of its fanbase will see this tweet. The more subtle meaning may be referring to the fact that the island in the poster looks a lot like a human skull (the word “subtle” is doing some heavy lifting here). Coupled with the poster’s reference to past Blumhouse horror hits Get Out and Halloween, I’m guessing the thing they really want us to see is the skull. But hey, maybe it’s both!

The official plot summary from Sony Pictures reads, “The enigmatic Mr. Roarke (Michael Peña), makes the secret dreams of his lucky guests come true at a luxurious but remote tropical resort. But when the fantasies turn into nightmares, the guests have to solve the island’s mystery in order to escape with their lives.”

It’s a bit of a startling direction for Fantasy Island to take, which was a drama series with some supernatural elements but wasn’t explicitly horror. However, in the show, Mr. Roarke’s goal was to use the fantasies he created to teach the guests lessons about their own lives. It’s kind of like It’s a Wonderful Life meets The Monkey’s Paw. So leaning fully into the horror elements makes a weird amount of sense. And judging by the plot description, the movie seems like it will still be pretty faithful to the show. I’m weirdly excited for this one, so hopefully we get a trailer soon. In the meantime, check out the poster below.