Synopsis – In Jumanji: The Next Level, the gang is back but the game has changed. As they return to rescue one of their own, the players will have to brave parts unknown from arid deserts to snowy mountains, to escape the world’s most dangerous game.

My Take – A few years ago when Sony had announced that they are working on a sequel to the classic 1995 adventure film, Jumanji, starring the late Robin Williams, it seemed like just another effort made by a major studio to cash in on a 90s brand nostalgia.

However the skepticism deteriorated when the plot details arrived, which tweaked its original concept from the board game and moved the adventure into a video game. While I personally thought the film was forgettably decent, never realizing its full potential, it did end up doing box office wonders, earning around $962 million at the worldwide box office.

With all around appreciation coming in especially for its all-star cast, who all seemed to be playing roles far from their comfort zones, while telling a heartwarming story about overcoming surface differences and becoming friends. And given its success, it was only a matter of time till a sequel had arrived.

However, what surprised me the most this time around is that, instead of settling for a lazy, by-the-numbers follow-up, it actually managed to improve upon its predecessor, in a number of interesting ways. While returning director Jake Kasdan once again used the simple videogame-esque jungle adventure narrative template as a base, he also cleverly doubled down on the body-swapping mayhem from last time, eschewing formula in favor of something with a little more heart, as well as provided a ripe opportunity for the unlikeliest of actors to revel in yet another side to their respective performance. Resulting in a film which is just unabashedly fun. 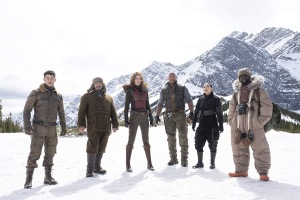 Taking place roughly a year after the events of the previous film, the story once again follows Spencer (Alex Wolff), Martha (Morgan Turner), Fridge (Ser’Darius Blain) and Bethany (Madison Iseman), four former high school friends, who continued to maintain the bond they forged in jungle of Jumanji, and are now heading home for Christmas after spending their first term at college. But unknowing to the rest, Spencer who had moved to a New York college, has been feeling isolated for some time, which in turn has even affected his relationship with Martha.

Having secretly managed to retain the Jumanji video game, Spencer seeking reassurance about his life, once again dives back in alone. When Martha, Fridge and Bethany realize what he has done, they decide to follow him, in order to get him back. Once inside, they realize that this is not the same game anymore, and the levels have changed. Making matters worse is that they are all assigned random avatars.

While Martha remains Ruby Roundhouse (Karen Gillan), Fridge becomes the overweight Professor Oberon (Jack Black), and instead of Bethany, Spencer’s grandfather Eddie (Danny DeVito) and his friend estranged Milo (Danny Glover) have been pulled in, and have taken on the avatars of Dr Bravestone (Dwayne Johnson) and Mouse (Kevin Hart). With the land of Jumanji under threat from an evil warlord named Jurgen the Brutal (Rory McCann), the group must go from arid deserts to snowy mountains to save everyone and finish the game. Jumanji being Jumanji, the process isn’t that simple.

While the sequel uses many of the same elements that were well-received in Welcome to the Jungle like the body-swapped identities, explaining game mechanics to clueless players, and action sequences that aren’t confined by real-world physics, the film still manages to stay fresh.

What strikes you immediately about the film is that the writers have clearly learned several lessons from the previous film. In particular, it’s no longer a slightly underwhelming single joke film, but instead the writers have put a lot of thought into how they can mix things up and play with their set-up. A key part of this is the inventive introduction of an in-game element that allows them to switch avatars, which in turn allows the actors to play different roles within the film.

Another key improvement lies in the confidence of both the writing and the direction, as the film touched upon on a lot more emotion than the previous film. While the 2017 film had a love story between its two leads, Martha and Spencer, here we get a wonderful tale about not only love but also facing your fears and growing old.

Which pays off beautifully in a powerfully emotional scene towards the end that involves a horse being translated by one character and the real-world character’s responses being channeled by another in-game character. On the surface, it’s a sublimely ridiculous scene and it would be funny on its own, but the surprise is that it actually worked on an emotional level too.

There are a lot of throwbacks to Jumanji: Welcome to the Jungle, which will be an added bonus for the fans of the previous film, although you don’t need to have seen it to enjoy this one. But it’s not all just laughs and emotion. The sequel has more of everything – from dangerous obstacles to new game mechanics and more plot points. The overall scope of the action seems bigger too, everything has been dialed up. We get deserts, snowy mountains and a terrifying Indiana Jones-style sequence with rope bridges and killer monkeys.

That said, as with the first film, some of the gags still fall flat, though there are definitely more laugh-out-loud moments than there were in the first film. Similarly, some of the callbacks should probably have been cut, for example, a sequence involving the sudden appearance of a boom box is poorly directed and doesn’t work at all. On top of that, Roy McCann (the Hound from Game of Thrones) may look the part, warlord-wise, but he makes for a disappointing villain overall and the film never really establishes a significant level of threat.

Thankfully, director Kasadan knows his biggest strength lies in his cast, who are in absolute top form. The casting of Danny DeVito and Danny Glover was an excellent choice, because it allowed Dwayne Johnson and Kevin Hart the opportunity to give a different performance than what they had done in the last film. Hart does his best Glover impression and is especially great, since he has to forgo the motor mouth antics he’s best known for, and slow his performance down.

Johnson as DeVito is also inspired, since they’re such opposites: but Johnson’s impression of DeVito does falter in the more dramatic scenes. Jack Black is also brings his a‐game. While his gags are constantly in danger of getting stale, he somehow keeps it fresh and bring new layers to it.

In a surprising turn of events, this time around Karen Gillan‘s character is effectively the lead, with the males taking the comedic supporting roles. Which goes well towards compensating for how relatively side-lined Gillan was last time round and she delivers a terrific lead performance as a result, nailing both the action and comedy elements.

Awkwafina fits right into this group of misfits and brings a lot of electric energy to the screen. She also nails the physical comedy in the films’ final third, while Nick Jonas has a smaller role but it’s integrated well with the story. As expected, Ser’Darius Blain, Morgan Turner, Alex Wolff, Madison Iseman, Rhys Darby and Colin Hanks are also good. On the whole, ‘Jumanji: The Next Level’ is a delightfully fun sequel which improves significantly on the previous film and works mainly due to its immensely likeable cast.