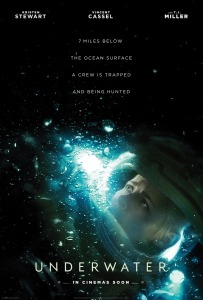 Disney’s 20th Century Fox has started airing a new Underwater TV spot, which you can watch using the player below. Underwater opens in theaters on January 10, 2020.

7 miles below the ocean’s surface something has awakened. The film follows a crew of underwater researchers who must scramble to safety after an earthquake devastates their subterranean laboratory. Directed by William Eubank, Underwater stars Kristen Stewart, T.J. Miller, Vincent Cassel, John Gallagher Jr, Jessica Henwick, Mamoudou Athie and Gunner Wright.

The film is produced by Peter Chernin, Tonia Davis, Kevin Halloran and Jenno Topping. It was written by Brian Duffield and Adam Cozad.

Kristen Stewart first hit the public eye in the Twilight films. She’ll next be seen in Seberg, which had its world premiere at the Venice Film Festival on August 30, 2019. It also screened at the Toronto International Film Festival on September 7, 2019. She also stars in Charlie’s Angels, which is currently playing in theaters, and has Clea DuVall’s Happiest Season coming in November of 2020.