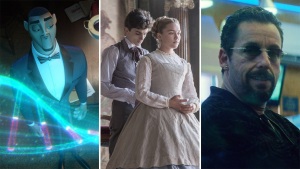 Disney‘s Star Wars: The Rise of Skywalker topped the weekend box office for a second weekend in a row, while the weekend’s newcomers — Sony‘s Little Women and Fox‘s animated feature Spies in Disguise — both topped studio expectations as did this weekend’s expansion of Uncut Gems, which has now topped $20 million domestically.

With an estimated $72 million, Disney‘s Star Wars: The Rise of Skywalker dipped -59% in its second weekend, pushing the film’s domestic gross over $361 million after ten days in release. The drop is much larger than we expected given the past performances of films over the same time frame. It is, however, better than the -67.5% second weekend plunge for The Last Jedi a couple of years ago as it has managed to close the gap between the two films after ten days in theaters.

Internationally, Rise of Skywalker added $94.3 million this weekend for a $363 million overseas cume and a global tally that is now just shy of $725 million. This weekend didn’t see any new markets released as the UK still leads all international markets with $51.4 million. Next weekend will see the film open in Vietnam.

Sony‘s Jumanji: The Next Level landed in second place with an estimated $35.3 million for the three-day, playing more in line with expectations at this time of year, improving +33% compared to last weekend and topping $175 million domestically as it enters its third week in release. Internationally, the film added another $61.6 million, pushing its overseas cume to $296 million for a global tally that now stands at $472 million.

Third is where we find the first of the weekend’s new wide releases in Sony‘s Little Women, the latest retelling of the Louisa May Alcott classic from writer-director Greta Gerwig. The film, which stars Saoirse Ronan, Emma Watson, Florence Pugh and Eliza Scanlen brought in an impressive $29 million over the course of its five-day debut ($16.52m three-day). The performance is well ahead of Sony‘s extraordinarily low expectations of $16-17 million for the first five days, but does line-up with Mojo‘s pre-weekend forecast. The film received an “A-” CinemaScore from opening day audiences that saw crowds that were 70% female with 71% of the audience coming in aged 25 or older.

Internationally, Little Women launched in the UK and Spain this weekend, bringing in $4.6 million and $1.6 million respectively for an estimated $6.3 million start. The film will open in Australia and France on January 1 followed by openings in Brazil (Jan 9), Italy (Jan 9), Mexico (Jan 24), Germany (Jan 30) and Russia (Jan 30).

Disney‘s Frozen II also saw a jump this weekend compared to last, improving +27% with an estimated $16.5 million three-day and a domestic cume that now stands at $421.3 million. Internationally the film added another $42.2 million for an overseas cume totaling nearly $800 million as the global tally now stands at $1.217 billion making it the third largest animated release all-time worldwide, topping Minions ($1.159b).

Rounding out the top five is Fox‘s animated feature Spies in Disguise, which delivered an estimated $22 million five-day performance ($13.5m three-day) after launching on Christmas Day. The film received an “A-” CinemaScore from opening day audiences while playing to an audience that was 54% female with 40% of the crowd coming in aged 25 or older.

Internationally, Spies in Disguise brought in an estimated $16 million from approximately 51% of the international marketplace for a $38.1 million global debut. Mexico led the way with an estimated $2.3 million opening followed by France ($2.2m), UK ($1.9m), Germany ($1.2m) and Spain ($1m). The film will open in Australia and China next weekend with January launches set for Russia, Kore and Brazil, ending in Japan with a May 22 release.

Outside the top five, landing in seventh position, is A24‘s Uncut Gems, which went wide this past week, playing in 2,348 locations and delivered an estimated $18.86 million over the last five days, pushing the film’s domestic cume over $20 million, serving as the largest five-day performance in the studio’s history, although the sample size is relatively small. One potential cause for concern, however, is that while the film scored an “A-” CinemaScore in limited release, this week’s wide audience gave it a “C+”. The audience score at RottenTomatoes is also just 54%, which puts a question mark on the film’s future.

This weekend also saw the limited release of Sam Mendes‘s 1917 in 11 locations in Los Angeles, New York, San Francisco, Chicago, Dallas, Washington DC and Toronto where it brought in an estimated $1 million over its first five days in release after launching on Christmas Day. The weekend’s limited release audience gave the film an “A” CinemaScore and it will break nationwide on January 10 after having already secured three Golden Globe nominations, including Best Picture, Best Director and Best Original Score and eight Critics’ Choice nominations.

WB had the limited release of Just Mercy in four locations in New York and Los Angeles where it brought in an estimated $229,000 over its first five days in release ($111,000 three-day). The film scored an “A+” CinemaScore from all demographics along with a 98% audience score on RottenTomatoes. The film will go wide on January 10 in over 2,200 locations.

Next weekend sees just one new wide release hitting theaters with Sony once again bringing The Grudge to the big screen, this time around the remake is rated R and will debut in over 2,500 locations.