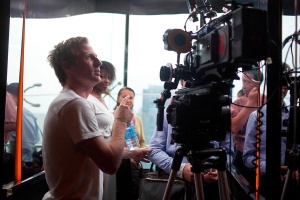 The Beastie Boys made the announcement on Twitter on Wednesday afternoon, posting a photo from the documentary as well as some important information about its release. Per the tweet, Beastie Boys Story will arrive at select IMAX theaters on April 3 before making its way to Apple TV+ on April 24. The photo matches Variety‘s description of the documentary, which is being billed as a “live documentary film” shot at Brooklyn’s King’s Theater.

“Wait, what!?! I just heard that Mike & Adam made a movie about Beastie Boys with Spike Jonze. Is that for real?" – Larry
“Yes. It's kind of a live documentary film & we think you’re gonna love it.” – Us#BeastieBoysStory streams on @appletv Apr 24, select @IMAX theatres Apr 3 pic.twitter.com/kAyPFgLizF

A more in-depth synopsis was provided on the Beastie Boys’ official site in lieu of a trailer, which is apparently still being worked on. The Beastie Boys Story synopsis currently goes a little something like this:

“Here’s what the film is: Mike Diamond and Adam Horovitz of Beastie Boys tell you an intimate, personal story of their band, and their 40 years of friendship together. From the 1980s New York City punk scene, to ‘Fight For Your Right (to Party)’ and becoming the first hip-hop artists to make a #1 record (Licensed to Ill), through their evolution, which took them to Sabotage, Intergalactic, and beyond. Created with their old friend, their former grandfather and collaborator, filmmaker Spike Jonze, the film seamlessly mixes a live stage show and documentary to create a new format, a live documentary.”

The breakdown also makes note of key Beastie Boys founding member Adam “MCA” Yauch, whose presence will still be felt in the documentary despite his passing from cancer in 2012.

“Their co-conspirator, musician, activist, inventor, discredited astrophysics professor and my favorite Beastie Boy, Adam Yauch, couldn’t be there that night because he passed away in 2012. But even though he’s not there, his spirit is very much felt onstage through Mike and Adam and the force of nature that was Yauch, their band, and their friendship.”

Jonze and Beastie Boys go way back to 1994, where Jonze directed the “Sabotage” music video. It feels like a good sign that Horovitz and Diamond have once again brought Jonze into the fold to help tell their story, which Variety notes is the byproduct of their 2018 book Beastie Boys Book published at Random House.

Beastie Boys Story is coming to Apple TV+ on April 24.