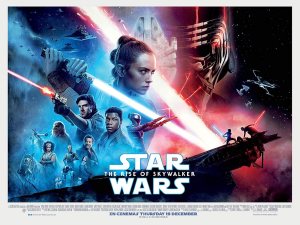 It’s official: Star Wars: The Rise of Skywalker has crossed the $1 billion mark in global sales. The J.J. Abrams-directed feature has spent 28 days in theaters across the world following its debut on December 20, 2019. Since then, Rise of Skywalker has continued to be a high-earner both in the domestic box office rankings as well as at the international box office despite it being the lowest-earning Star Wars sequel trilogy installment.

Thanks to Disney’s latest box office update, Rise of Skywalker officially has $1,001.0 million worldwide in the bank. This number reflects a domestic overall total of $481.3 million and an international overall total of $519.7 million. That total reflects earnings from two days of previews plus 26 official, wide-release days. Rise of Skywalker is currently showing on 4,279 screens across the U.S. while its highest-earning international markets are the UK ($72M), Germany ($61.7M), Japan ($56.4M), France ($50.7M), and Australia ($30.3M).

Rise of Skywalker crossing the $1 billion mark is big, yes, but the epic Skywalker saga conclusion took a noticeably longer time to hit that mark than its predecessors, 2015’s Star Wars: Episode VII – The Force Awakens and Star Wars: The Last Jedi. Back in 2015, The Force Awakens hit $1 billion in just 12 days — a record-breaking win, by the way. As for The Last Jedi, it took 17 days to hit $1 billion and made it the highest-grossing film of 2017. It’s not necessarily a bad thing for Rise of Skywalker to have taken so long to hit $1 billion but it is worth keeping a peg in as we look to the future of the Star Wars universe and what stories or characters are box office gold.

Star Wars: The Rise of Skywalker is still in theaters