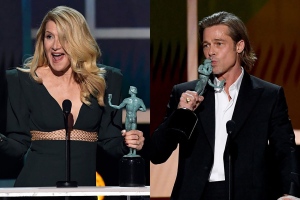 The 26th Screen Actors Guild Awards played out pretty much as expected Sunday evening… except when they didn’t. On the film side of things, the winners in the Best Actor, Actress, Supporting Actor, and Supporting Actress categories were the same winners we’ve been seeing pretty much all awards season long, which means unless something truly crazy happens we can expect to see them take home the Oscars as well. So collect your prizes Joaquin Phoenix, Renee Zellweger, Brad Pitt, and Laura Dern.

But the top SAG award of the night went to a bit of a surprise. The SAG Awards don’t have a “Best Picture” award since the whole point of the awards ceremony is to honor performances (as voted on by fellow actors in the Screen Actors Guild), but they do have a “Best Ensemble” and that trophy went to the cast of Bong Joon-ho’s critically acclaimed Parasite. The lead actors from the film drew a standing ovation when they appeared on stage to simply present their movie, making clear just how much actors love this movie. And since actors make up the largest voting branch in the Academy, does this mean Parasite could win the Best Picture Oscar?

Maybe! In truth, the SAG Best Ensemble award is not a reliable predictor of Best Picture success. It hasn’t matched up with the Best Picture since 2015 when Spotlight took Best Ensemble, and only four of the last 10 Best Ensemble winners went on to win Best Picture. Last year the award went to the cast of Black Panther, and the year previously it went to Three Billboards outside Ebbing, Missouri.

However, this win does make clear that Parasite can win a top award on a major ballot like the SAG Awards, and last night’s win also was not a great sign for the chances of Once Upon a Time in Hollywood and The Irishman. Once presumed the frontrunners of the season, the new films from Quentin Tarantino and Martin Scorsese have been losing top honors to 1917 during the most recent guild awards.

Over on the TV side of things, Phoebe Waller-Bridge won Best Actress in a Comedy Series for the brilliant Fleabag, but in a bit of a twist The Marvelous Mrs. Maisel won the Ensemble award. Accepting the award, Maisel star Alex Borstein was shocked, admitting she voted for Fleabag in all available categories.

Check out the full list of 2020 SAG Awards winners below.

The Motion Picture Recipients are:

Outstanding Action Performance by a Stunt Ensemble in a Motion Picture
AVENGERS: ENDGAME

The Television Recipients are: