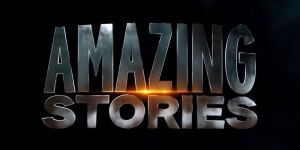 Apple TV+ has released the first trailer for Amazing Stories, the streaming service’s reimagining of the sci-fi/fantasy anthology series with Steven Spielberg on board as executive producer. Lost and Once Upon a Time producing/writing duo Eddy Kitsis and Adam Horowitz will serve as showrunners on Amazing Stories, which hits Apple TV+ on March 6.

The trailer gives a pretty good look at the type of fantastical mini-adventures the series will take the audience on, all of which come with heavy Amblin vibes. (Throwing that original John Williams theme song in there certainly helps a good deal.) This season of Amazing Stories has a line-up of directors that includes names like Chris Long (The Americans), Mark Mylod (Game of Thrones), Michael Dinner (Sneaky Pete), Susanna Fogel (The Spy Who Dumped Me), and Sylvain White (The Rookie).

Check out the trailer below. Five episodes of Amazing Stories will debut globally on Friday, March 6 only on Apple TV+.

Here is the official synopsis for Amazing Stories: