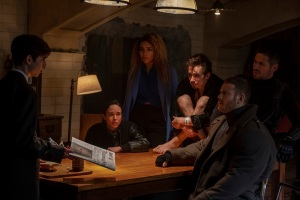 Season 1 of Netflix’s TV series adaptation of The Umbrella Academy premiered (and concluded) just about this time last year. If you haven’t watched the first 10 episodes, quit reading now and go do that. It’s a great take on the superhero sub-genre of storytelling and worth a watch. But if you have watched Season 1 and are curious to know more about Season 2, read on; spoilers follow.

The first season finale saw the Hargreeves family banding together (sort of) to protect their own but accidentally causing an apocalypse along the way, courtesy of fragments of our destroyed moon raining down upon the Earth. Since one of their members happens to possess the power of time-travel, they opt to journey back in time to hopefully avoid this fate and avert the apocalypse. The only problem is that they may have overshot a bit too far; the Hargreeves return to their teenage years. How long they stay in this state remains to be seen–and just when The Umbrella Academy returns to Netflix for Season 2 is just as uncertain–but Netflix is at least getting the marketing train moving along with the reveal of new character posters, seen below.

This time travel thing? It gets messy. The cast of Umbrella Academy is back for Season 2! pic.twitter.com/qTnlTjeteB