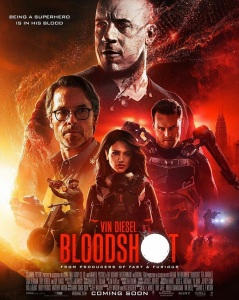 Bloodshot star Vin Diesel says that Sony‘s film opens the door for more Valiant superheroes to make it to the big screen.

Speaking to Thai outlet Fanatic Association, Diesel told the hosts, who asked about characters such as X-O Manowar, Ninjak, and Harbinger, that the film would “open the door” to the entire Valiant Universe.

Here’s video of the interview:

In 2015, it was announced that Valiant‘s film universe would launch with Bloodshot, followed by Harbinger and two more films leading to a Harbinger Wars crossover movie. “The long-term plan that begins with Bloodshot will be a considerable priority for Sony in the months and years to come,” said then Sony Pictures‘ president Doug Belgrad at the time.

However, in 2017 Sony and Valiant shifted their plans to launch with Bloodshot, before re-arranging plans again to start their franchise with Harbinger first. This reversed again one final time, with Bloodshot now launching the Valiant Cinematic Universe, with a planned Harbinger film as the second entry.