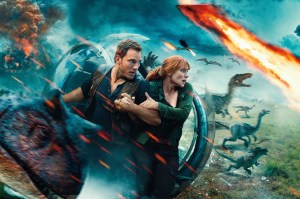 Giacchino is, of course, one of the best film composers working today, having crafted scores for films as varied as Up, Doctor Strange, and Bad Times at the El Royale (which, it should be noted, is sorely underrated). He’s coming off two very different scores in 2019 for the Marvel sequel Spider-Man: Far from Home and Taika Waititi’s Oscar-winning anti-hate satire Jojo Rabbit. Most recently, Giacchino was announced as the composer for Matt Reeves’ highly anticipated reboot The Batman, so fans are eager to hear him put his stamp on the Caped Crusader’s onscreen persona. We heard a tiny snippet a few weeks ago, and it was mighty exciting.

And now 2021 will bring us Giacchino’s scores for both The Batman and Jurassic World 3.

Take a listen to some of Giacchino’s past work on the Jurassic World franchise below, and if you want to hear/see more from the composer, check him out on our episode of Comic Book Shopping.