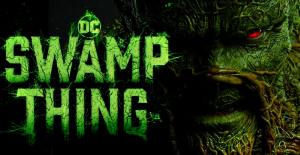 Swamp Thing clearly had plans on continuing before the DC Universe series was suddenly cancelled after just one season due to tax rebate and budget issues. One of the biggest teases for what was to come in the future was in the post-credits scene at the end of season one. In it, we see Kevin Durand’s Dr. Woodrue transform into the Floronic Man.

Here is the synopsis for Swamp Thing:

SWAMP THING follows Abby Arcane as she investigates what seems to be a deadly swamp-born virus in a small town in Louisiana but soon discovers that the swamp holds mystical and terrifying secrets. When unexplainable and chilling horrors emerge from the murky marsh, no one is safe.

One response to “‘Swamp Thing’: Behind The Scenes Video Offers Full Look at Kevin Durand’s Floronic Man!! Check It Out!!”