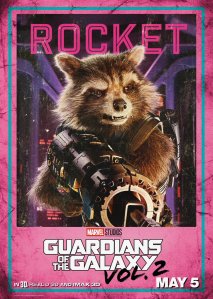 I’ll just say Rocket is a big part of what’s happening in the future – and a lot of this stuff (like the scars we’re about to see on his back) sets up what I’ve been planning for Rocket all along. #QuarantineWatchParty #GotG https://t.co/WLqoiG7Wzg

Gunn has noted that Rocket is kind of a surrogate for his own personality in these movies, so it will be interesting to see what happens with the character and how he relates to his fellow heroes in this movie. I’m also curious about what kinds of themes Gunn is looking to explore in the third installment. The first Guardians is about a team of misfits coming together, and the second Guardians is about them becoming a family. While the end of Guardians of the Galaxy, Vol. 2 teased the arrival of Adam Warlock (a major character in the comics), I’m more invested in what happens to the Guardians in the future, especially in a post-Endgame world and how the MCU is rapidly changing (or at least, how it rapidly changes once the movies and TV series start coming out). That being said, Rocket is a great character and I love how he’s changed and transformed over the course of the MCU without losing his attitude, so if Gunn wants to make him the centerpiece of the third movie, I’m all for it.

Guardians of the Galaxy 3 does not currently have a release date and it’s not in Marvel’s announced plan for Phase 4. Gunn is currently at work in post-production on The Suicide Squad, which is currently scheduled for August 6, 2021.