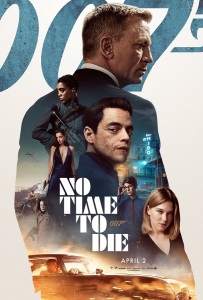 No Time to Die was one of the first films to be delayed over COVID-19 concerns, with its release date being pushed from April to November 2020. We’d seen a couple of trailers by the time the film was delayed, but the story was still being kept under wraps. We know Rami Malek plays the villain, we know Christoph Waltz reprises his Spectre role as the villainous Blofeld at some point, and we know that Lea Seydoux is back as Dr. Madeline Swann, also from Spectre.

And while Fukunaga’s film is being billed as the final performance by Daniel Craig as James Bond, we can reasonably expect the film to still be, well, a James Bond movie. But if a rejected pitch of Fukunaga’s is any indication, we may be in for a few more surprises than folks are expecting.

During an interview with Miranda July conducted for Interview Magazine well before No Time to Die was pushed back, Fukunaga revealed that he pitched an idea for Bond 25 that would have taken place inside Bond’s head. Yep! Here’s how he described it:

“Miranda, I swear to God, I had an idea that this movie could all be taking place inside the villain’s lair from the last film. There’s this scene [in Spectre] where a needle goes into James Bond’s head, which is supposed to make him forget everything, and then he miraculously escapes by a watch bomb. And then he and Léa blow up the place, and go on to save the day. I was like, ‘What if everything up until the end of act two is all inside his head?’”

Obviously the Bond producers didn’t spring for this one, but that would have been kind of great right? The Bond franchise is fascinating in that, while it has always chased whatever kinds of movies are “trendy” at the time, the films themselves don’t necessarily take many narrative leaps. The biggest change of pace was from Die Another Day to Casino Royale, with the latter film rebooting the franchise with a much grittier tone and an emotionally available James Bond.

So how great would it have been to be sitting through No Time to Die, watching things get slightly strange, and then go through the shock of learning we’ve never left Blofeld’s stronghold this entire time? It kind of makes me mad this didn’t happen, and no doubt Fukunaga drew at least some inspiration from his underrated Netflix limited series Maniac. Although that’s a pretty hefty bet and the studio presumably didn’t want to risk angering a legion of Bond fans, not to mention trying to keep this massive plot twist under wraps.

I’m still excited to see what Fukunaga has put together, but man, this “what if” idea for No Time to Die sounds like an absolute delight.

The non-dream version of No Time to Die hits theaters on November 25th.