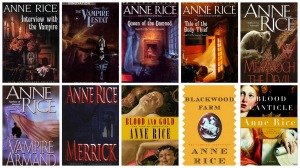 After years of being shopped around, the rights to novelist Anne Rice‘s work have been purchased by AMC Networks. Previously, Hulu had the rights to Rice’s The Vampire Chronicles, with plans in place for Paramount Television and Anonymous Content to develop a television series based on the popular series for the streamer. In December 2019, Rice and her son, Christopher Rice, parted ways with Hulu and Paramount, beginning the process of shopping a massive rights package to her body of work once more.

Now, just five months later, AMC Networks has announced via press release they’ve bought the rights to Rice’s work. AMC now holds the rights to Rice’s most popular works like The Vampire Chronicles series, which includes Interview With The Vampire, The Vampire Lestat, Queen of the Damned, and The Witching Hour, as well as Rice’s The Lives of the Mayfair Witches. All told, AMC now has the rights to 18 Rice titles which are ripe for developing into movies and TV shows at the networks and/or streaming services under AMC’s umbrella. Terms of the deal were not revealed at time of reporting, but in Variety‘s report covering the Rices exit from Hulu, it was reported the price sought for the rights package was somewhere in the $30 to $40 million range. Sticker shock aside, the package is a comprehensive one as it includes the TV and film rights, in perpetuity, to Rice’s work.

In a statement on the deal with AMC, Rice commented,

“It’s always been my dream to see the worlds of my two biggest series united under a single roof so that filmmakers could explore the expansive and interconnected universe of my vampires and witches. That dream is now a reality, and the result is one of the most significant and thrilling deals of my long career.”

Even with no official plans confirmed by AMC on which title they plan to start developing and for what network or streamer, the prospect of Rice’s novels getting some new life breathed into them in exciting. It’s been years since we’ve seen a Rice work make it to the screen. 26 years have passed since 1994’s Interview with the Vampire, starring Tom Cruise as Lestat and Brad Pitt as Louis, his protégé. Interview was followed up by the extremely middling 2002’s Queen of the Damned and plans to develop even more of Rice’s work bouncing around for years, with Alex Kurtzman, Roberto Orci, Josh Boone, and Hannibal‘s Bryan Fuller respectively attached at various points in time to develop projects for film and TV.

Now, with the rights officially at home at AMC Networks, we should definitely keep an ear to the ground for new projects to be announced, including what I’m sure would be the most obvious first step, a reboot (in either film or TV form) of Interview with the Vampire. The timing of the deal is also particularly prime as it provides an opportunity for AMC to develop something in the paranormal/supernatural vein of The Walking Dead franchise while expanding their offerings and breathing life into titles which have a massive fanbase.