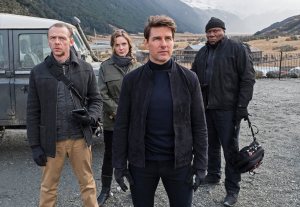 “Mission: Impossible 7” is set to restart filming in September after shutting down filming earlier this year due to COVID-19 — and the film’s outdoor scenes are set to shoot first.

Actor Simon Pegg, who plays Benji Dunn in the franchise, tells Variety that a September restart is “the plan” for the film. “That will begin with the outdoor stuff,” says Pegg, “That feels fairly doable, and obviously there will be precautions put in place.”

The British actor, who stars in the forthcoming thriller “Inheritance” and recently appeared in Amazon’s “The Boys,” joked that fight scenes would need to be shot “five feet apart.”

However, asked about the logistics of resuming production on the action film, Pegg said, “People that are involved in any close proximity stuff, it will have to be determined that they’re safe to do that. I don’t know what the testing situation is, how that works, or whether they’ll be able to be tested regularly.”

Plans to restart a major tentpole movie like “Mission: Impossible 7,” with its huge crews, casts and multiple locations, will be seen as a major boost for the global film production industry.

Speaking on BBC Radio 4’s Today program on Tuesday morning, “Mission: Impossible 7” first assistant director Tommy Gormley first confirmed the fall plans: “We hope to restart in September. We hope to visit all the countries we planned to. We hope to do a big chunk of it back in the U.K. on the backlot and in the studio.”

Gormley added he was “convinced” the Paramount production could meet its target of shooting from September through to April/May.

Production on the Tom Cruise-starring franchise was halted in late February just days before it was due to start shooting scenes in Venice. At the time, Italy was emerging as the epicenter of the coronavirus outbreak in Europe.

Asked about the complexities of producing a large-scale feature at this time, Gormley said: “This is our challenge. We are not a chamber piece movie. We do spectacle, and that is what people expect of us.

“If we have the protocols in place and we break down all the procedures very carefully…we will get it going again. Some things are very challenging such as stunt scenes, crowd scenes etc. but we can’t do a ‘Mission Impossible’ movie and not have a fight scene or car scenes in it.”

Gormley explained that the movie industry was highly adaptable, and recalled working a few years ago in a giant brewery complex for a “Star Trek” shoot, where crew had to wear goggles, ear protection and gloves — similar to the PPE kit required for coronavirus.

“Because we were in a food factory, that’s what we did and we didn’t think twice about it…We are incredibly agile and we’re used to working in the most extreme situations in the most extreme locations. We can basically tackle anything if we prepare it carefully enough.”

Gormley was speaking a day after the British Film Commission published its guidelines for safe production of film and high-end TV in the coronavirus era. He described the guidelines as “excellent,” adding: “We have to go back to work for every person in the film industry, tens of thousands of people…we have to do it safely and we have to protect our colleagues.”