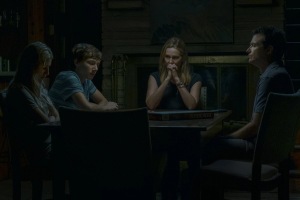 Netflix has renewed Ozark for an expanded fourth and final season that will air in two parts, the streaming service announced Tuesday.

Ozark Season 4 will consist of 14 episodes that will air in 7-episode bursts, and it will mark the final chapter in the Byrde family’s dark journey from suburban life in Chicago to their criminal enterprise in the Ozarks.

Jason Bateman, Laura Linney and Julia Garner return to star alongside Sofia Hublitz, Skylar Gaertner, Charlie Tahan and Lisa Emery. I’d also be surprised if Felix Solis didn’t reprise his role as cartel boss Omar Navarro, given the way Season 3 ended. Meanwhile, Linney will serve as a co-executive producer on Season 4, a well-deserved title that signals her significant creative contributions to the show.

Chris Mundy will return as showrunner and writer, and he and Bateman will serve as the creative forces behind both parts of the new season, which hails from MRC Television. Mundy and Bateman will executive produce with Mark Williams, John Shiban, Patrick Markey and Bill Dubuque.

“We’re so happy Netflix recognized the importance of giving Ozark more time to end the Byrdes’ saga right. It’s been such a great adventure for all of us — both on screen and off — so we’re thrilled to get the chance to bring it home in the most fulfilling way possible,” Mundy said in a statement.

“A super sized season means super sized problems for the Byrdes.  I’m excited to end with a bang(s),” added Bateman, hinting that more gunshots are on the way following the one that closed Season 3.

“Ozark is a gripping drama that has captivated audiences all around the world and garnered tremendous critical acclaim. We’re so grateful to Chris, Jason, Laura, Julia and the entire cast and crew for all their tireless dedication to the show, and can’t wait to see how the Byrdes’ journey comes to a close,” Netflix’s Cindy Holland said in a statement.

The streamer included a fun little teaser in its announcement, which you can see below.

They're going to go out with a bang.

Ozark will be back with an expanded 14-episode final season. pic.twitter.com/otIoUeTXyH