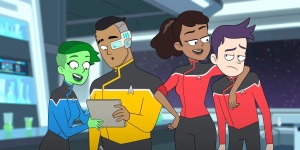 CBS All Access has announced that the new Star Trek animated series, Star Trek: Lower Decks will premiere on August 6th. The series will focus on the support crew serving on one of Starfleet’s least important ships. Hailing from Mike McMahan (Rick and Morty), the main cast appears to be a collection of ensigns (voiced by Tawny Newsome, Jack Quaid, Noel Wells, and Eugene Cordero), and the supporting characters will be the bridge crew including “Captain Carol Freeman,” voiced by Dawnn Lewis, “Commander Jack Ransom,” voiced by Jerry O’Connell, “Lieutenant Shaxs,” voiced by Fred Tatasciore and “Doctor T’Ana,” voiced by Gillian Vigman.

This could be a really fun show, and I’m excited to see what they do with it. The “Lower Decks” episode of Star Trek: The Next Generation is a personal favorite of mine, and while that obviously skewed more dramatic than what this animated series is going for, I think it’s good to get a look at Starfleet beyond the command crew and also have a little fun while they’re doing it. I wouldn’t be surprised if this low-key becomes the best Star Trek show on CBS All Access.

CBS All Access also released the first poster for the show, which you can check out below. STAR TREK: LOWER DECKS will focus on the support crew serving on one of Starfleet’s least important ships. The series will be produced by CBS’ Eye Animation Productions, CBS Television Studios’ new animation arm; Secret Hideout; and Roddenberry Entertainment. Secret Hideout’s Alex Kurtzman and Heather Kadin and Roddenberry Entertainment’s Rod Roddenberry and Trevor Roth and Katie Krentz will serve as executive producers alongside creator Mike McMahan (“Rick and Morty”). Aaron Baiers (Secret Hideout), who brought McMahan to the project, will serve as a co-executive producer. The series will air exclusively on CBS All Access in the United States and will be distributed concurrently internationally by CBS Studios International.