After the announcement of Iti, Mandiraa Entertainment and Vivek Anand Oberoi’s Oberoi Mega Entertainment come together again for their second film, Rosie-The Saffron Chapter which is set to become India’s first horror-thriller based on true events. This film will also be helmed by Vishal Mishra, who is known for Coffee With D and more recently, Iti.

Based on true events that took place in Gurgaon, Rosie is planned as a horror-thriller franchise. The first part, Saffron Chapter is based in the Saffron BPO, considered as one of the most haunted places in Gurgaon. The story revolves around a girl called Rosie who was an employee in this BPO. 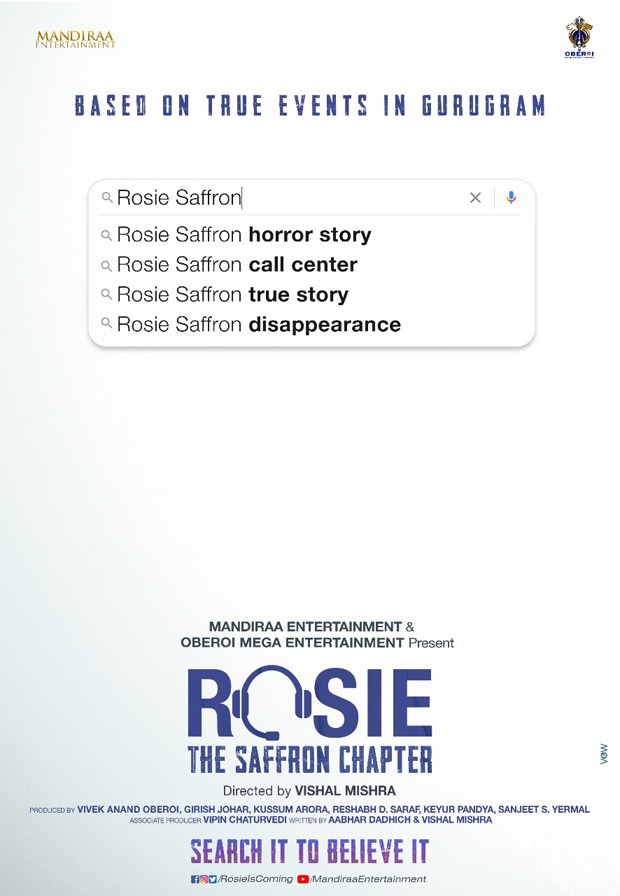 In the light of recent events and discussions around nepotism, the makers have also decided to launch a nation-wide hunt for a new face, that will star in a prominent role in the film. The details would be made available soon on official movie handles, @RosieIsComing along with the announcement of the lead cast.

Vivek Anand Oberoi, producer says, “With my new venture, I want to support the concept-driven films that I believe can change the movie landscape in their respective genres. And not just the film, but also make way for new talent. With Rosie, I hope to achieve both. It’s a franchise and with every sequel, we hope to introduce someone new in the industry.”

Prerna V Arora says, “I’m thoroughly excited with the concept of Rosie, and we want to develop this as our in-house franchise brand. We want to tell different and novel stories, especially based on true incidents. An idea or the talent can come from anywhere, and we want to be able to facilitate them through such films and such initiatives.“

Vishal Mishra, writer – director says, “In a country full of strange supernatural events, we have rarely seen any horror-thriller films based on true events. With Rosie, I hope to break those grounds without falling prey to any horror film cliches. I’m excited that this project, like Iti is backed by Vivek Anand Oberoi and Prerna V Arora, who share my vision on both films. Being an outsider myself, I can relate to the struggles or challenges that are posed in this industry. I’ve been lucky to get so much acceptance and support here, and I want to pass it onto those who are trying to make it here.”

Kussum, producer says, “Our intent will always be to pick the best stories & back the right content. The story of Rosie instantly connected with us & gave us the impetus to bring it to our audiences. We are very excited to go on floors with this one.”

Girish Johar, producer says, “Vishal always comes up with very novel ideas and unique concepts. Rosie, especially, is a hair-raising story. This is an in-house branded franchise, which we want to develop and explore. The minute I heard the story, along with producers Kussum & Reshabh, I was sure to back this up. This film is expected to redefine the horror genre in India and leave you wanting for more.”

The film is expected to go on floors by September 2020 and release shortly after. Rosie: The Saffron Chapter is presented by Mandiraa Entertainment and Oberoi Mega Entertainment, and produced by Vivek Anand Oberoi, Girish Johar, Kussum Arora, Reshabh D. Saraf, Keyur Pandya and Sanjeet S. Yerms.