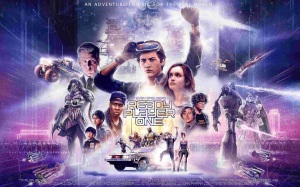 Ready Player Two, Ernest Cline‘s highly-anticipated sequel to his blockbuster debut novel Ready Player One, is set to publish on Nov. 24, it was announced Wednesday by Ballantine Books, an imprint of Penguin Random House.

Ready Player One was set in a near-future dystopia where people escape the chaos of the real world for an expansive virtual universe called the OASIS where they can create their own reality. The book spent over 100 weeks on the New York Times bestseller lists, and was voted one of America’s 100 Most Loved Books of All Time on PBS’ The Great American Read.

International publication dates for Ready Player Two will be announced in the coming months, and will exceed the 58 countries and 37 languages in which Ready Player One was published. The new book is available for pre-order beginning today.

Ready Player One was one of the best reading experiences I’ve ever had, and I can’t wait to get my hands on Cline’s sequel, which I plan to devour over Thanksgiving break. It’s just one more thing I’ll be grateful for during this challenging year. Check out the book cover for Ready Player Two below.