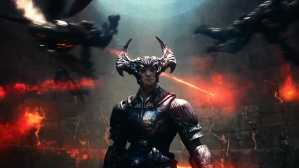 Director Zack Snyder has unveiled a sneak peek at the new Steppenwolf design for (the tentatively titled) Zack Snyder’s Justice League. This new look at the DCEU villain arrives just two weeks ahead of his appearance at the DC FanDome event on August 22.

On Saturday night, Snyder hopped on the VERO app to share a still of his new Steppenwolf design. Along with the photo, he shared these fairly spicy remarks: “Just working today. Pulled this out of the editorial. Sorry he’s low-resolution, but I’ve seen him in all his hi-res glory and he’s a thing to behold  .  Quick question… how many f@*ks do you think he gives???”

The new Steppenwolf design is certainly a sight to behold, and makes this mother(box)-lover look way more ferocious than his 2017 counterpart. While generally taking the same form as 2017’s Steppenwolf, this Snyder Cut Steppenwolf is, er, spikier and he appears to be taller too. All in all, he does not look like someone you’d want to cross paths with.

This new Steppenwolf design also marks the second time Snyder has shared a new character design with DCEU fans, with the director sharing footage of Superman’s black suit and a new Darkseid design in recent months. Snyder has been giving us little sneak peeks since he announced his Justice League Snyder Cut would be coming to HBO Max next year. Among the most exciting of the sneak peeks (in this writer’s opinion, anyway) was the brief clip featuring Gal Gadot‘s Wonder Woman and Jesse Eisenberg‘s Lex Luthor voice-over. The new Steppenwolf design, in addition to these other peeks behind the Snyder Cut curtain, will have fans mighty curious to see what he trots out in two weeks at DC FanDome.

Zack Snyder’s Justice League will be released on HBO Max in 2021. You can take a closer look at the new Steppenwolf design below.