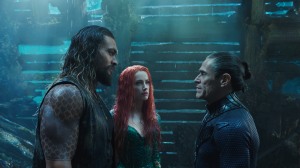 DC FanDome was extremely short on Aquaman 2 news during a panel dedicated to the highest-grossing DCEU film thus far, but director James Wan did offer one curious bit of information. The Conjuring filmmaker reunited with his Aquaman star Patrick Wilson to reminisce about the making of the DC movie, which shocked pretty much everyone by grossing over $1 billion – more than Warner Bros.’ higher-profile DCEU films like Man of Steel and Batman v Superman: Dawn of Justice.

During the course of their conversation, they touched briefly on the in-development Aquaman 2, and Wan said the sequel will be a little more serious than the first film:

That’s honestly a bit of a bummer. Those who really loved Aquaman loved it for its unabashed goofiness. It took a hard left turn away from Zack Snyder’s deadly serious tone and leaned into how ridiculous a character like Aquaman is. I mean, how does one craft a scene in which people battle while riding seahorses and not acknowledge how silly that is?

Wilson noted that he hopes to see more new worlds in the sequel, and Wan assured him he would, so at least the aesthetic of Aquaman 2 will be a bit different.

Jason Momoa was curiously absent from the panel (he didn’t appear during the Snyder Cut panel either), but he’s attached to return for the follow-up. Warner Bros. has set a December 2022 release date for the movie, but Wan was in no rush to return. Indeed, he went off and made a new horror movie called Malignant after Aquaman’s massive blockbuster success, and it sounds as though he’s taking his time to craft a worthwhile follow-up. Let’s just hope it’s not too serious.