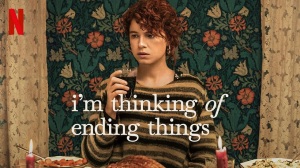 Synopsis – Full of misgivings, a young woman travels with her new boyfriend to his parents’ secluded farm. Upon arriving, she comes to question everything she thought she knew about him, and herself.

My Take – There is no denying of the fact that Charlie Kaufman is undeniably one of the greatest and most absurdly talented writers of the century who specializes in unusual plots and oddball characters. His notable writing works like Adaption, Being John Malkovich and Eternal Sunshine of the Spotless Mind have earned the right to make you see them more than twice and think about them forever.

Therefore, I was obviously excited about his return to direction as his last film, the 2015 animated feature, Anomalisa, was truly a unique piece on its own. And with an incredibly talented cast to back him, I was intrigued to see what he would do with a road film based on the book of the same name from author Iain Reid.

The end result is well complicated. I’m not going to lie, if I hadn’t read the book a week before the release of the film on Netflix, I would have had a hard time figuring out its intricate elements, mainly as he takes the style of ambiguous and metaphoric film making to a whole new level here.

From the incredibly perplexing narrative told through bizarre storytelling to its distinctly unconventional technical characteristics, as a director Charlie Kaufman offers a remarkably complex film that can end up taking different interpretations, as everything including the dialogue between the main characters has some philosophical meaning behind it. And while some of these conversations have an eventual impact on the narrative, the rest just felt like director Kaufman needed to express his thoughts on cultural, intellectual, and every other sophisticated matter.

However, the film suffers from a slow and methodical pace, a factor which I believe hinders the effect of the whole film, and hence may probably result in a majority of people watching, quitting right after the first hour.

While my gripe with the film results in the way the ending was delivered, fans of Kaufman would enjoy this intriguing, head-scratching, weirdly captivating story packed with cultural debates and unique characters. 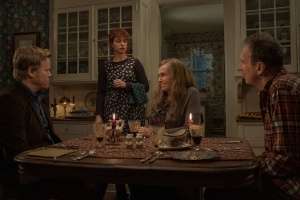 The story follows a young woman (Jessie Buckley) who with her boyfriend of six weeks named Jake (Jesse Plemons), embarks on a long snowy road trip to meet his parents for the first time. The thing is she’s not sure about the relationship anymore, though Jake is nice and intelligent, she has been thinking of ending things. However something seems really off when she enters his family home, a small farmhouse in a white desert of nothing.

Firstly the dog won’t stop shaking itself dry, then she see herself in pictures of Jake as a boy, but most importantly, his parents (David Thewlis and Toni Collette) seem too happy to see her, and for some reason she sees them aging and de-aging from room to room. Leaving her confused about the whole affair. All the while the film also gives us small glimpses into the life of a high school janitor (Gus Boyd), as he goes about his duties.

Here, director Kaufman mixes horror, with comedy, and psychological shock all leading up to a dance scene and many unanswered questions about what is real and what is only in the young woman’s mind. The film itself is disorienting, and the final act does little to help us regain our equilibrium.

While we never see what attracted these two to each other, and wallow in their misery and discomfort, it is hard not to appreciate director Kaufman‘s sneakily metaphorical and symbolic writing as well as the claustrophobic and impeccable cinematography, cleverly composed to capture the most important details that you probably won’t catch on the first watch. Making an impactful move in life requires determination, courage, and decisiveness.

Moving to another country, switching jobs, ending a relationship, all can be extremely demanding and psychologically painful. Here, director Kaufman brilliantly demonstrates how one can delay these actions sometimes indefinitely. From the excruciatingly long car drives to the enigmatic transitions of time passing by, the film’s screenplay keeps transmitting a message of how people are stationary and time just keeps flowing.

Despite the fact that the story moves in a weird directions, these car scenes especially push the film with a natural rhythm. Most of the film is watered with her stream of melancholy thoughts, always returning to ‘I’m thinking of ending things’. 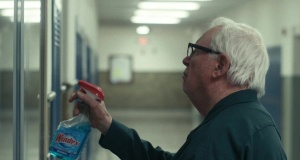 Yes, there’s a limit to how abstract and implicit a film can be without becoming genuinely hard to understand, and director Kaufman walks that threshold. The time shenanigans performed in the parents’ house is undoubtedly intriguing, but it’s more distracting than helpful story-wise. Having in mind the already puzzling narrative, the confusion associated with understanding how time works only creates even more doubts. It also deviates the viewer’s attention from the real focus, which didn’t help my first viewing.

In fact, I was so concentrated trying to comprehend the purpose behind the old-young versions of the characters that I completely lost track of the runtime, ultimately thinking the film was near its ending when it still had more than 30 minutes to go. Plus I don’t think director Kaufman fully thought about how to end the film correctly, and the final 15 minutes feels like an allegorical and metaphorical mix-mash that no one can really fully understand unless they have read the book.

Performance wise, Jessie Buckley is absolutely outstanding and elevates every single line of dialogue, showing tremendous emotional range. Toni Collette is weirdly captivating as an amusing yet disturbing mother. While, David Thewlis and Jesse Plemons are comparatively subtler yet creepy. On the whole, ‘I’m Thinking of Ending Things’ is one of the most unnerving films of the year which depending on preferences will turn out to be quite the intricate watch. 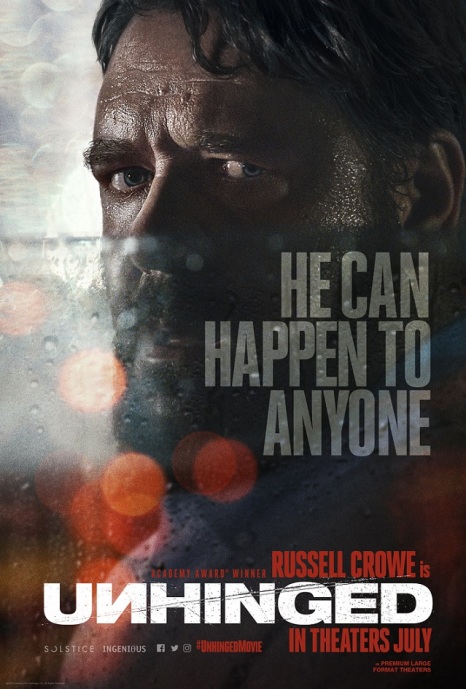