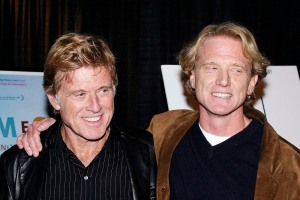 James Redford, documentary filmmaker, activist and son of Robert Redford, has died. He was 58.

The Sundance Institute, a nonprofit organization co-founded by James and Robert Redford in 2005, confirmed his death on Monday. The organization tweeted it was “deeply saddened” by the news of his death and commended the filmmaker for being “a fierce advocate for the power of storytelling to drive impact on the issues that matter most.”

“Jamie was a deeply intuitive and kind collaborator. Our community of artists and colleagues grieves this loss and sends condolences to the Redford family; Jamie’s warmth, passion and generosity of spirit will continue to inspire us,” the organization added.

His wife Kyle told The Salt Lake Tribune on Monday that her husband had died from bile-duct cancer in his liver.

James Redford had been diagnosed with primary sclerosing cholangitis, an auto-immune disease that affects the liver, which resulted in him receiving two liver transplants in 1993. After surviving the transplants, he launched the James Redford Institute for Transplant Awareness, a nonprofit dedicated to educating the public about the need for organ and tissue donation, and produced The Kindness of Strangers, a documentary film exploring the sacrifices made by organ donor families.

Born in New York City in 1962, Redford attended the Dalton School and graduated with a bachelor’s degree in creative writing and film from the University of Colorado at Boulder. He also earned a master’s degree in literature from Northwestern University.

As a filmmaker, his work tackled topics such as clean energy with the film Happening: A Clean Energy Revolution and dyslexia with The Big Picture: Rethinking Dyslexia, inspired by his son, Dylan, and his struggles with dyslexia in high school. He also wrote the script for Hearts and Bones, starring Kiefer Sutherland and Daryl Hannah, and adapted Tony Hillerman’s Skinwalkers for North Fork Pictures.

James was Robert’s third child with his former wife Lola Van Wagenen and the second son Robert has lost; his first, Scott, died of sudden infant death syndrome at 2 1/2 months in 1959. Redford has two surviving daughters, Shauna and Amy.

James is survived by his wife, Kyle, and their children, Dylan and Lena.