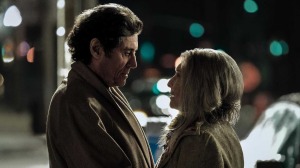 Season 3 of American Gods finally has a release date. The Starz original series based on the bestselling novel by fantasy icon Neil Gaiman returns January 10, 2021. The date was revealed in a letter to American Gods’ fans penned by Gaiman himself.

When we embarked upon making Season Three of “American Gods,” we had no idea how timely it would turn out to be. We knew we wanted to return to what people loved and responded to in the book: that it was time for Shadow to go to the little town of Lakeside and try to lose himself in normality.

And at the same time, in Season Three, we wanted to focus on the characters and their journeys. To show Shadow forging a path guided by the Gods of his ancestors, becoming more himself while deciding who he is and what side he’s on — humanity’s or that of the Gods.

We knew also that we wanted to continue to root the show in the landscapes of America. To explore what “America” means to its people and to talk about immigrants — about the very different people who came to this remarkable land and brought their gods with them. The new gods of phone and app and glitter demand our attention and our love, and the old gods want to mean something again.

America must be for all of us, and “American Gods” must reflect that. This season truly feels as if it does. It’s full of drama and emotion, the very real and the utterly strange, and it features some of the finest performances the show has yet seen. It brings back favorite characters, some in remarkable new ways, and we will encounter people and gods we’ve never met before. I’m proud of our brilliant cast — of Ricky and Emily, of Yetide and Ian, Bruce, Demore, Omid and all the rest — and of what the writers have done to bring the story back on track.

The struggles of the gods and the people in Season Three of “American Gods” are the struggles of America. We didn’t think it would prove as timely when we plotted it, nor did I think the novel would still be relevant when I wrote it over 20 years ago. But I’m glad it’s happening now, in a year when it feels as though diverse stories are being heard, and honored, and allowed to change the future.

Thank you so much,

Along with the letter, Gaiman teased Season 3 with an image of the Lakeside Clunker Board from Hinzelmann’s shop, which fans should recognize as a reference from his international best-selling book.

American Gods has been plagued by controversy almost since its premiere back in 2017. Original showrunners and producers Bryan Fuller and Michael Green left the show after one season following a clash with Starz. Hannibal writer Jesse Alexander was brought in to replace Fuller in Season 2, but left the show following reports of being sidelined (and possibly even fired) by the network. Stars Kristin Chenoweth and Gillian Anderson both left the show after Season 1, and Orlando Jones took to Twitter to air his grievances with current showrunner Charles Eglee after learning he and Mousa Kraish had effectively been fired from the show and would not be returning for Season 3. That said, Gaiman’s continued enthusiasm for the show is a good sign for fans, who can look forward to a weekend marathon of the show’s first two seasons on Starz leading up to the Season 3 premiere. All eight episodes of Season 1 will air January 9th beginning at 12 PM ET/PT, with Season 2 airing January 10th at 12:20 PM ET/PT right up until the Season 3 premiere at 8 PM ET/PT. You can check out the teaser image below.