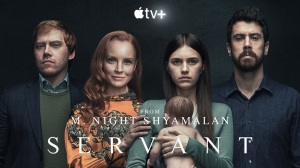 When Apple TV+ launched last year, it came out of the gate with a pretty eclectic assortment of programming in its first few months, from the star-studded The Morning Show to the family-friendly Snoopy in Space to the WTF-ery of See. But be far the most strange and singular show was Servant, the M. Night Shyamalan-produced horror mystery about a pair of grieving parents, their super suspicious live-in nanny, and the creepy-ass baby/doll intended to help them cope with their grief.

So, is that nightmare doll a real baby now? Who the heck is the nanny actually? Why didn’t Lauren Ambrose get awards attention for her outstanding performance? How does Rupert Grint make the cravat and brusque Philadelphia accent work so well? Servant‘s first season left all these mysteries and more dangling, while the season finale hinted at a much bigger potential mythology for the series, and in keeping, the new Season 2 teaser is pretty dang mysterious about what to expect going forward.

And here is the equally mysterious logline for Season 2:

“Following its suspenseful season one finale, the second season of the thriller takes a supernatural turn with a darker future for all lying ahead as Leanne returns to the brownstone and her true nature is revealed.”

Well heck, I guess it wouldn’t be a Shyamalan production if it didn’t keep us in suspense waiting for some wild answers. However, while Shyamalan produces and directed some episodes, the series was created and written by Tony Basgallop, which gives it its own unique flavor, and oh boy, that bleak tone and surreal world-building sure did get under my skin in the first season, so I’m eager to see what spooky twists are in store for the next ten episodes, even if I’m definitely confused about what the actual heck is going on.

Season 2 of Servant will premiere with the first episode on January 15, 2021, followed by new episodes every Friday. Check out the teaser below.