Synopsis – A rowdy, unorthodox Santa Claus is fighting to save his declining business. Meanwhile, Billy, a neglected and precocious 12 year old, hires a hit man to kill Santa after receiving a lump of coal in his stocking.

My Take – With Christmas just a month away, Hollywood has, expectedly, already begun its roll out of holiday films catering to families, who plan to have a joyous good time together. However, this film from writer-directors Ian Nelms and Eshom Nelms, isn’t that kind of a film, despite looking like one.

Though Hollywood has seen its share of edgy Christmas films before, with some portraying different depictions of Santa Claus, ranging from a superhero to a funny man with great advice, with any negative depiction in the end revealed to be an impostor. But here the film making brothers take a distinct step by casting Mel Gibson to play a grumpy, gun-toting Father Christmas who is faced with financial woes while being hunted down by an oddball hit man, hence forming a concept sufficient to sustain a deliciously bonkers film.

While the film has its set of charming offerings, with a cast and crew that is committed to a knowingly ludicrous conceit, unfortunately, despite all the world-building, the film abruptly becomes a generic action flick with a fleeting B-film pleasure, that while demonstrates the Nelms brothers’ cleverness, it does so at the expense of a satisfying screenplay, which is disappointing considering the promise it held from its premise.

Though the story is completely bizarre, you could imagine the film somehow working if a singular, more certain tone was embraced. The film has a satirical potential that it never fully realizes, and just becomes a violent action film without fulling embracing the lunacy enough to be successful.

The story follows Chris Cringle (Mel Gibson), aka Santa Claus, the legend known for bringing toys to all the good girls and boys every Christmas Eve, who lives in remote Alaska with his supportive wife Ruth (Marianne Jean-Baptiste) and team of elves who work for him. But his income has been on a gradual decline over the years mainly as children are becoming less well-behaved, hence fewer toys are delivered. Realizing that he is very close to bankruptcy, in a bid to save his factory and to ensure that his team of elves stay employed, Chris agrees to allow the U.S. military into his factory so the loyal elves can help build parts for warplanes.

Meanwhile, Billy Wenan (Chance Hurstfield), an amoral rich kid who is neglected by his father and cannot stand to lose, incensed at his Christmas list being rejected and receiving a lump of coal instead, swears revenge by calling in the Skinny Man (Walton Goggins), a hit-man with his own vendetta against Father Christmas.

In its early stretches, the film has fun playing this premise straight, imagining a reality in which not only is there a Santa Claus but one who exists in a Tarantino-esque genre flick. There’s an instant feeling of intrigue when you take Santa and alter him from the kid-friendly persona many are familiar with. The red suit is gone, random outbursts of joy cease to exist, and the task of gifting children around the world can be life-threatening. The film intends to be a dark comedy, but most of its jokes fall flat, or just aren’t very funny. The humor in this comes from the narrative, which is over the top insanity.

For most of its runtime, the film is actually a tongue-in-cheek character study. The overworked and under-appreciated Chris has become disillusioned that the world has lost its kindness, provoking him to wonder if it’s time to finally hang up his sleigh. Only when Chris confronts the hitman in a wintry third-act showdown turns into a proper action film, setting the stage for Chris, as he’s about to engage in a firefight with Skinny Man.

While the film is structured around the inevitable confrontation between Chris and the Skinny Man, unfortunately expectations of a non-stop shoot-‘em-up between Gibson and Goggins will be dashed. 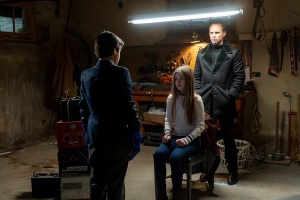 However, the main problem with the film is that it plays its premise straight, squandering the opportunity to be the kind of gonzo holiday film that could serve as seasonal counter programming to other holiday fare. Here, the Nelms brothers don’t fully capitalize on their high-concept idea, giving us too much world-building and too many flagrantly weird characters. The bizarre setting never expands, and the film making isn’t stylish or kinetic enough to energize the proceedings.

Chris’ ultimate Western-style showdown with the Skinny Man hints at a film that could’ve been, and a touch more of that aesthetic might’ve helped blend the film’s matter-of-fact B-film silliness with Western stoic machismo; at the spectrum’s other end, themes about finding optimism and hope in a cynical, commercialized season aren’t half as well-realized as they ought to be, mostly because they’re brought up briefly and hardly addressed after the fact. If only the Nelms brothers possessed a little more focus and courage.

But as it stands, both Mel Gibson and Walton Goggins carry the show. Gibson is eminently watchable as a gruff, hangdog Santa, flinty on the outside but kindly behind the eyes. Mainly as the film softens him up in ways none of his films attempt to, but without sacrificing the grave charisma that’s so intrinsic to his persona. Goggins brings an unhinged electricity to Skinny Man. He emotes little, but he makes everything hilarious, whether he’s ambivalently gunning people down in their sleep or fixing his frizzed-up hair.

Marianne Jean-Baptiste‘s casting is an inspired choice and she shares an endearing chemistry with Gibson, while Chance Hurstfield excellently plays a rich prick. In other roles, Eric Woolfe and Robert Bockstael are also good. On the whole, ‘Fatman’ is a substandard action thriller that spoils its deliciously bizarre premise with wobbly execution.