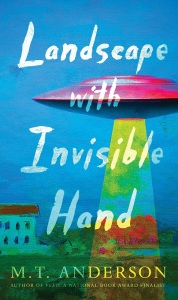 After reigning the world of comedy since her breakout turns in Girls Trip and The Carmichael Show, Emmy winner Tiffany Haddish is gearing up to explore the stars as she has entered final negotiations with MGM to lead the film adaptation of M.T. Anderson’s Landscape with Invisible Hand, according to Deadline.

Published in 2017, the novel is set in the near future after an alien species known as the Vuuv have essentially taken over the planet as their technology has eliminated a number of jobs and caused the global economy to collapse. The story centers on aspiring artist Adam as he and his neighbor Cleo hatch a plan to pretend to be romantically involved and stream their dating life to the aliens, who are fascinated by the human concept of true love, for money to support their families but as the pressure begins to take a toll on their psyches, they struggle to keep the plan going without causing their families to go bankrupt.

The film is being written and directed by Cory Finley, who first broke out to rave reviews with his directorial debut Thoroughbreds and followed it up with the Hugh Jackman and Allison Janney-starring HBO drama Bad Education, which took home the Emmy for Outstanding Television Movie.

The project is being produced by Brad Pitt’s Plan B Entertainment and Annapurna Pictures, who jointly acquired the rights to the novel in 2017 and developed it together before bringing the package to MGM, which will be releasing the title theatrically in the U.S. via United Artists Releasing.