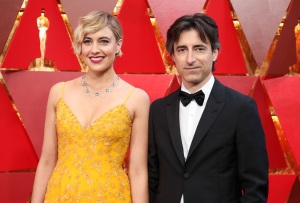 Filmmaker Noah Baumbach is getting the gang back together for his next film. After earning immense acclaim for perhaps the greatest feature of his career thus far, Marriage Story, the writer/director is reuniting with that film’s star Adam Driver for an adaptation of the Don DeLillo novel White Noise. The news comes courtesy of a Production Weekly listing (via The Film Stage), which notes that Baumbach’s partner and frequent collaborator Greta Gerwig will also co-star, and filming is due to get underway in June. The film is being made for Netflix, which made and released Marriage Story.

The satirical book follows a professor of Hitler studies (Driver) at a liberal arts college in Middle America who’s now on his fourth wife (Gerwig). When an “airborne toxic event” unleashes a lethal black chemical cloud, they must face the danger of death together.

It sounds incredibly weird, but I like that after the emotional divorce drama Marriage Story Baumbach is taking a big swing with his next feature. And Driver and Gerwig – who starred together in Baumbach’s 2012 film Frances Ha – are two of the best actors working today, so one imagines they’ll knock this out of the park.

Currently Baumbach and Gerwig are co-writing a Barbie movie for producer and star Margot Robbie, which is being teased as a unique take on the icon. Gerwig herself is, of course, a tremendous filmmaker and we’re patiently awaiting news on her next feature. Whether that might go after White Noise is anyone’s guess, but it was kind of fun to see Baumbach and Gerwig approach awards season together last year with Marriage Story and Little Women.