Synopsis – A mind-bending love story following Greg who, after recently being divorced and then fired, meets the mysterious Isabel, a woman living on the streets and convinced that the polluted, broken world around them is a computer simulation.

My Take – While sci-fi films with mind-bending stories aren’t exactly new, they are still considered novel as very few have succeeding in mastering at them, and often end up heading in two directions. One where the story accompanying the visuals and other components are so compelling that even visible plot holes are overlooked by the audience devouring the piece, like filmmaker Christopher Nolan‘s Inception, Interstellar and to some extent, Tenet. But, on the other end of the spectrum we have films like filmmaker Steven Knight‘s disastrous Serenity, which are based on overly incomprehensible story lines that even a cast that includes Anne Hathaway and Matthew McConaughey cannot make up for the incoherent decisions taken on screen.

Sadly, this is the case too for this latest Amazon Prime release from writer-director Mike Cahill.

Though, director Cahill, who has helmed films like Another Earth (2011) and I Origins (2014), has demonstrated a knack for using vague big ideas to tell small stories, is in familiar territory here, his latest sees him tripping on his own grand ambitions, all the while insisting that the audience pay attention to the big concepts without providing any of the human detail that is required to makes them interesting.

Honestly, the film actually starts off rather intriguingly but soon enters convoluted territory once it attempts to explain itself, making it one of those films that want to appear as if it has big ideas, but actually has nothing to say. Instead of being a mind-bending film with purpose, it’s a mind-numbing puzzle that’s missing half its pieces.

Somewhere in here, there’s a remarkable film about an absent father trying to make good with a daughter who never loses faith and director Cahill seems to be taking earnest stabs at big ideas and themes, including the concept of bliss, but regrettably, the film is submerged by his distracted approach to make the film appetizing while never working on an effort to draw us in on an emotional or intellectually to the sci fi romance. 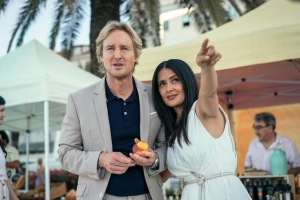 The story follows Greg Wittle (Owen Wilson), a divorced plodding office worker who just can’t seem to focus at work and, after a particularly bad day, finds himself both jobless and homeless. But his life takes a strange turn when following a random tragic incident, Greg meets Isabel Clemens (Salma Hayek) in a nearby bar, who tells him that the two of them are the only real people in a world that’s actually a computer simulation.

An element she proves to him by showing how they can control things with just their minds, although to enhance this ability, they have to take mysterious yellow pills. As Greg falls deeper into Isabel’s world, he falls further away from what had been his reality, including his relationship with his recently graduated daughter, Emily (Nesta Cooper), who seems to be constantly on the hunt for him.

We spend basically the entirety of the rest of the film living in Greg’s red pill and blue pill moment. On whether to believe that there is some utopian future from whence Isabel came and that this dingy, polluted, graffiti-covered late-capitalist jungle world where Greg’s children still live is just a simulation or whether it’s the utopia itself that’s a figment of his mind. While director Mike Cahill questioned our realities in his previous two films, however, this time around his approach is muddled and unstructured. Where, in the past, he has been so careful to place the reality of the human emotions at the heart of his magic-realist ideas, here they play second fiddle to an underwritten Vanilla Sky (2001) inspired narrative.

Though the film wants to play like a philosophical science fiction-romance, but it forces us to spend much of our time trying to determine if it is too bizarre or not bizarre enough. Sure, a successful complex story will push us to buckle down and engage, but this one never allows us to connect with the characters, hence resulting in a loss of interest despite its 103 minute run time.

It purposefully tries to trick us into choosing whether it’s a computer simulation, parallel universes, or making a statement on severe mental illness. An answer which we of course don’t clearly get until the end, I think. Here, director Cahill goes down a number of different roads along the way and seems to have one very specific allusion in mind to tie everything together, but he never finds the right way to make the story work.

He keeps upping the ante in terms of weirdness, but the story is never strong enough to care about the things Greg encounters, and the visuals aren’t fascinating enough to distract from the fact that the story is going nowhere. And for some reason he chooses to spend a lot of time showing the effects of the yellow crystals. Only if added more scenes contrasting the two worlds instead of the long intro of simulation, the film would have been less confusing and frankly probably more enjoyable.

Like I mentioned above, there is a good film buried deep beneath the layers of the simulated worlds, as it does ponder a genuinely interesting question: Are our lives really bettered by the knowledge that they are worse in other realities? What would it do to someone’s brain if they found that out? What would you give up to live in one or the other? Unfortunately by the end, we realize this was a just convoluted story line for what was really a pretty simple explanation, and somehow we feel a bit cheated with the whole thing.

Performances wise, though both Owen Wilson and Salma Hayek are known for their good performances, their pairing here does not work at all. Especially with Salma Hayek‘s casting being one of the most unfortunate decisions of the film. From her painful dialogue delivery, Hayek’s exaggerated, over-the-top performance is especially grating, never quite allowing the viewer to become fully engulfed by the illusion of her character.

Which is a shame, because Wilson seems particularly invested and single-handedly holds the proceedings together with a strong performance which eschews his looks, crooked-smile charm and boyish attitude in favor of long silences betraying inner turmoil. He also shares better chemistry with Nesta Cooper, who in her limited screen time makes most of the role. In smaller roles, Madeline Zima and Jorge Lendeborg Jr. don’t have much to do, and for some reason Bill Nye, the Science Guy makes an appearance in an actual acting role. On the whole, ‘Bliss’ is a convoluted sci fi romance which despite big ideas turns into a colossal mess.