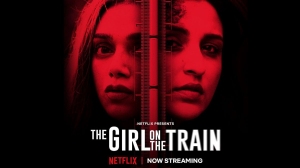 Synopsis – The story follows a recent divorcee who spends her daily commute fantasizing about a seemingly perfect couple who live in a house that her train passes daily, but something shocking happens there one day.

My Take – Like most readers I too thoroughly enjoyed author Paula Hawkins’s 2015 bestseller that told a tale of a missing woman with an unreliable narrator, red herrings and a central theme, which upon unraveling provides the solution to the mystery. The unreliability factor which, albeit fun for readers, also posed immense feature adaption challenges.

Though build on intrigue and melodrama, and anchored by a superior Emily Blunt performance, the 2016 Tate Taylor directed Hollywood production is considered unsuccessful (not commercially) by most as it struggled to by bypass this obstacle and thrive on its deeply interior narrative.

In a surprising turn of events, this Hindi remake, from writer-director Ribhu Dasgupta, takes the easy way out by completely sidestepping the source material’s principal ideas of psychological trauma, emotional abuse and gas lighting, all in favor of a choppy murder mystery where not one twist or turn seem convincing.

Though director Dasgupta earlier proved that he could handle thrillers well with Te3n (2016), a very underrated official remake of the South Korean film Montage (2013), here his narrative choices and umpteen Indian tweaks result in a film that completely misses the point behind the plot’s characters and their motivations, something which made the original material stand out.

While the film may seem engaging to anyone who hasn’t seen or read the material before, however, I found it impossible to steer ahead of the lackluster writing, the unnecessary presence of songs, and the contrived climax which according to me just ended up derailing the whole emotional impact of the story. 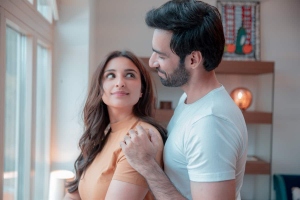 Set in London, the story follows Mira Kapoor (Parineeti Chopra), an advocate who lived a perfectly happy life with Shekhar (Avinash Tiwary), her cardiologist husband, until an accident which lead to her miscarriage. Now divorced, Mira, fractured by amnesia, leads a bitter aimless life, often finding solace in alcohol throughout the day and cursing her ex for moving on with Anjali (Natasha Benton). The only factor which keeps her sorrowful life exciting is her daily train journey from where she looks upon her former home across the tracks and its current resident, Nusrat (Aditi Rao Hydari), who seems to be leading a happy life with her husband, Anand (Shamaun Ahmed), helping her relive the moments she once adored.

However, during one such ride, upon seeing Nusrat finding comfort in the arms of another man on the balcony, Mira loses her cool and decides to confront her despite being strangers. And when Nusrat goes missing and Mira is spotted in the vicinity, she becomes an immediate suspect for Inspector Kaur (Kirti Kulhari) of Scotland Yard, forcing the alcoholic to question her memory and movements before the supposed evidence catches up to her.

As I mentioned above, rather than being a psychological drama about a woman who is lost and finds herself again through sheer willpower, director Dasgupta’s remake ventures mainly into thriller territory and suffers mostly due to its lackluster narration. While the film does start off reasonably well and sets us up for a romantic relationship gone totally wrong under testing conditions nicely, it soon falls for the usual gimmicks that comes with the territory.

Especially the way the murder investigation that seems to be carried out at by convenience, giving the whole film an unintelligent cloud.  Having jettisoned the main premise of author Hawkins’s intelligent and sensitive page-turner, the Hindi remake comes up with a ludicrous replacement theory for Nusrat’s disappearance. It involves non-linear episodes, flat-voiced ruminations by Mira, and the crisscrossing of several redundant characters.

Also, roles of important characters, like Shekar’s second wife Anjali, have been chopped off mercilessly and various sub-plots have been excluded. The characters in this world don’t appear to be layered, but confused and lack the certain depth. The film’s central theme has also been changed. While the original character, Rachel found purpose in trying to find Megan’s killer, here, Meera’s reasons are never completely clear, and the scenes revealing her recollecting the old memories that turned her life upside down are outright silly. Even the songs appear to be forced throughout.

Performance wise, though seemingly miscast as the self-destructive Mira, Parineeti Chopra, appears quite efficient in comparison to her usual hyper middle class girl roles. To her credit, despite the overdone make up to appear alcoholic, she manages to hold herself well. In other roles, Kirti Kulhari does a fine job, while Avinash Tiwary shines as well.

However, it is Aditi Rao Hydari who despite a sparsely written role, turns out to be a scene stealer and makes her presence felt the most by using her mystical, soft focus features to her advantages. In smaller roles, Tota Roy Chowdhury, Shamaun Ahmed and Natasha Benton are alright. On the whole, ‘The Girl on the Train’ is an insipid and uneven remake derailed by its ordinary execution and lackluster writing.