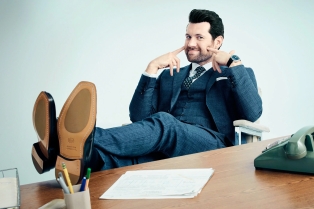 Somehow, some way, the upcoming 2022 movie Bros will be the first major studio romcom about a gay man. At least we’ve got an incredible talent at the forefront of this necessary course correction: Billy Eichner.

The Billy on the Street mastermind will co-write and star in Bros for Universal, announcing the news on his Twitter in a typically delightful fashion: “In shocking news, BROS will be the first rom com about gay men ever produced by a major studio and, apparently, I’m the first openly gay man to ever write and star in their own studio film. Only took 100 years! THANKS HOLLYWOOD!!! Also, fuck my manager in 2006 who told me to be less gay because a big agent was coming to my show. FUCKKKKKKK YOUUUUUUU!!!Ok I’ll shut up now.” I, for one, would like to say: Never shut up, Billy Eichner!

Per The Wrap, Bros will star Eichner as one half of a gay couple coming together. Eichner is co-writing the screenplay alongside Nicholas Stoller (Forgetting Sarah Marshall), who will also direct the picture. The film will be produced by Eichner, Stoller, Judd Apatow (The King of Staten Island), and Joshua Church (Trainwreck).

If you’re unfamiliar with Eichner, please do yourself a favor and watch as many Billy on the Street clips on YouTube as possible. It is Eichner and a star-studded group of guest stars roaming around New York City screaming questions at strangers, and it it just perfect. Other recent Eichner works include The Lion King, Noelle, American Horror Story, Difficult People, and Parks and Recreation. And I, for one, can’t wait to bro out with him.

Bros will be released by Universal Pictures August 12, 2022.