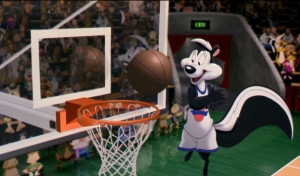 Pepé Le Pew will not be featured in Space Jam 2, a source confirmed to The Hollywood Reporter.

The controversial Looney Tunes skunk cartoon character was scrubbed from the Lebron James starrer more than a year ago.

News of the character’s absence from the Warner Bros. film broke Sunday evening, days after a New York Times opinion piece called out the character, among other problematic cartoon characters, in the wake of Dr. Seuss Enterprises announcing it would stop publishing six books because of racist and insensitive imagery.

The character was featured in Space Jam, which starred NBA living legend Michael Jordan. It is unclear if the cartoon character will be retired completely.