Synopsis – An Army medic suffering from post-traumatic stress disorder becomes a serial bank robber after an addiction to drugs puts him in debt.

My Take – It didn’t come as a surprise when Apple immediately scooped by Russo brothers disembark from the Marvel franchise as an Apple TV+ exclusive, after all they are credited for four back to back tremendous films, one of which holds the rank for the highest grossing film of all time (Avengers: Endgame). And while their new feature is a major departure from anything they have done before, as they attempt to tell a challenging story of American turmoil through the life of an Iraq War vet who struggles with life upon his return, they also ultimately ended up producing the most flawed version of the familiar story.

This semi-autobiographical feature, based on the acclaimed novel by Nico Walker, a veteran soldier who wrote it whilst he was incarcerated for bank robbery, contains an impressive lead performance by Holland, and a solid support from Ciara Bravo, but in the end its the staple stylizing of a Russo brothers film, that takes one away from the already cliché filled story and becomes more distracting than pleasing, resulting in a film that is ultimately a punishing 141 minute voyage, which accentuates the fact that the film is nothing that hasn’t been seen many times before.

However, the film does deserve a watch for Tom Holland. It’s not difficult to see why the Russo Brothers wanted Spider-Man himself to lead this cinematic war story, as Holland brings an incredible depth to the young soldier who struggles to hold onto the love of his life as he battles PTSD and addiction. Without a doubt, this film is a powerful example of how Tom Holland’s range can elevate any material, even material as bleak and depressing as this one. 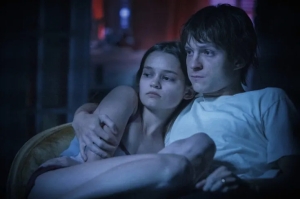 Told in different chapters, the story follows a disenfranchised young college student (Tom Holland), from Ohio, who finds a purpose when he meets the love of his life, Emily (Ciara Bravo). But just when the relationship begins to take hold, she informs him about transferring to Montreal, Canada, to finish her studies, unceremoniously breaking up with him. Distraught, and with nothing to hold on, taking inspiration from one of his fellas, he enlists in the Army.

Unfortunately for him, while Emily changes her decision and rekindles their relationship, he is called to begin his training as an Army medic to serve in Iraq. Though they both marry, and keep in touch throughout his tour, the whole experience especially a horrific incident that leaves multiple men in his unit dead, leaves him unhinged.

Hence when he returns home, despite starting a new well laid beautiful life with his wife, he finds himself battling with undiagnosed PTSD, which spirals into drug addiction, and drains his finances. Forcing him to turn to robbing banks to fund his addiction, shattering his relationship with Emily along the way.

Working as mix-mash filled with vibes of Full Metal Jacket, the horrors of Requiem for a Dream, and the dark wit and panache of Wolf of Wall Street, the film seems to have all the right ingredients, yet unfortunately don’t not blend together as well as one would imagine.

Honestly, this is a difficult film to love, as the Russos are visibly trying too hard to be both edgy and hardcore, using every technique at their disposal, and the screenplay, by Angela Russo-Otstot and Jessica Goldberg, contains some clever dialogue, but everything is just too drawn out making the film seem very long.

The initial setup also takes quite some time, and is done with a certain amount of verve and enthusiasm, suggesting that anything could happen, and when things get unstoppably bleak, you wonder about all the dark wit that laced the preceding moments and why they teased you that this could possibly go any other way.

Sure, as directors the Russos do deserve credit for giving this painful real-life experience the necessary cinematic depth, when it could have easily been a one-note retelling, but that can only carry a heavy subject matter so far. To entangle the viewer with the young veteran’s manic psychology, and to emulate Walker’s ferocious written-from-prison narrative, the directing duo exaggerate every cinematic element, from relentless camera motion to fourth-wall-breaking dialogue and action set-pieces seem better fit for a happier film.

Eventually, the weight of the film’s burdens becomes too much, and its ability to keep us engrossed in this violent exploration of America’s drug epidemic slips away too quickly, and this very unlikeability keeps the story from connecting with the audience.

But as I noted before, the performances are excellent, giving the film at least a good to reason for a single view. Though Tom Holland may not have felt like he was the right man for the job, he still gives it his all and gives a masterful performance. The film tests his ability to play scared warrior, drug addict, bossy bank robber and loving husband all at once. It’s a lot, but Holland delivers even when the nonlinear Russos don’t. Never did it feel like Spider-Man fell off the wagon and started doing drugs. No, this was definitely Tom Holland playing the lead every step of the way.

His talent is matched effortlessly by Ciara Bravo, who brings all the necessary pain and expression to her role as Emily for the audience to connect with. She is the anchor of this film, even when her addiction overcomes the character we are eager to get to know. Most importantly, the chemistry between Holland and Bravo is fluid and doesn’t feel forced as they both journey the rabbit hole together.

In supporting roles, Forrest Goodluck, Jack Reynor, Jeff Wahlberg, and Michael Gandolfini, are efficient too. In smaller roles, Kyle Harvey, Thomas Lennon, and Damon Wayans Jr. leave an impact. On the whole, ‘Cherry’ isn’t a very well-rounded film which despite a strong conviction, struggles to make an impression past its dazzling performances.