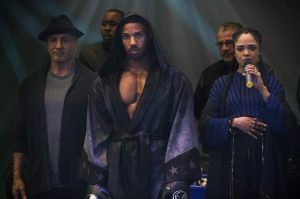 The rumor that Michael B. Jordan would make his directorial debut on Creed 3 has been floating around for almost a year now, but it wasn’t until today that the man himself made it official. According to MGM, Jordan has committed to directing the threequel, which the studio has given a Thanksgiving 2022 release date.

Here’s what Jordan said in a statement:

“Directing has always been an aspiration, but the timing had to be right. Creed III is that moment — a time in my life where I’ve grown more sure of who I am, holding agency in my own story, maturing personally, growing professionally, and learning from the Greats like Ryan Coogler, most recently Denzel Washington, and other top tier directors I respect. All of which sets the table for this moment. This franchise and in particular the themes of Creed III are deeply personal to me. I look forward to sharing the next chapter of Adonis Creed’s story with the awesome responsibility of being its director and namesake.”

The first Creed, a spinoff from the Rocky franchise directed by Ryan Coogler, premiered in 2015, introducing Jordan as the son of Carl Weathers‘ Apollo Creed and utilizing Sylvester Stallone‘s Rocky Balboa as a mentor figure. The film was a hit, and Jordan’s star power has skyrocketed in the meantime, from inventing a new level of shirtlessness in Marvel‘s Black Panther to, more recently, bringing a Tom Clancy character to life in the thriller, Without Remorse. A Creed sequel directed by Steven Caple Jr., hit theaters in 2018.

There’s not a ton of plot details yet on Creed 3, but the script will be written by Keenan Coogler and Zach Baylin, from a story outline by Ryan Coogler. Tessa Thompson and Phylicia Rashad are both set to return, although the jury is still out on ol’ Sly himself. Here’s what Michael De Luca, MGM’s Film Group Chairman, and Pamela Abdy, MGM’s Film Group President, said in a joint statement:

“Michael’s vision for Creed III is incredibly exciting and will undoubtedly be an important contribution to the cannon of this storied franchise. We are thrilled to bring his directorial debut, and share this next chapter in the Creed story, to theaters next year.”

Creed 3 will hit theaters on Thanksgiving, 2022.