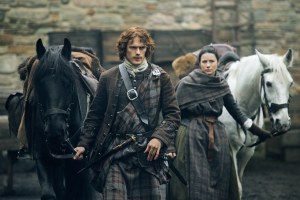 Good news, sassenachs! Outlander has already been picked up for a seventh season at Starz! The network confirmed the news via press release this week, with confirmation of a commitment to a 12-episode order for Season 7. The season will fittingly revolve around the seventh book in author Diana Gabaldon‘s bestselling series, titled An Echo in the Bone.

“We are so excited Starz has given us the opportunity to continue the epic Outlander journey,” said showrunner Matthew B. Roberts in a statement provided for the release. “We can’t wait to get into the writer’s room and start breaking Echo in the Bone and look forward to giving the fans another season of this exhilarating story.”

Diehard series readers may recall that Echo in the Bone is a book that revolves around not just Jamie (Sam Heughan) and Claire Fraser (Caitriona Balfe), but the adventures of Brianna (Sophie Skelton) and Roger Mackenzie (Richard Rankin) as well, as the story picks up with the latter couple having successfully traveled back to their present through the stones and trying to find what breadcrumbs Claire has left for them throughout history. Jamie’s son William, who is currently being raised by Lord John Grey (David Berry), also gets his turn in the narrative when he finally goes off to fight in the looming Revolutionary War. Given the show’s current placement in history, chances are we might get a few notable cameos too, as the Frasers encounter such historical figures as Ben Franklin and George Washington (who originally appeared in Season 4). Currently, Heughan, Balfe, Skelton and Rankin will all return for Season 7.

Season 6 of Outlander is currently filming in Scotland with a premiere date yet to be announced. If you need a certain Scot-related fix in the meantime, you can watch Heughan alongside his Outlander co-star Graham McTavish on the docuseries Men in Kilts, airing Sundays at 8 p.m. ET on Starz.