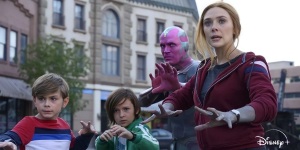 WandaVision’s official Twitter account has given us a peek into the magic of creating the show with a new set of behind-the-scenes photos — before the special effects kick in and the Vision’s (Paul Bettany) ears get digitally removed. Not coincidentally, each of the four released images is related to a big revelation of the series involving its four main characters.

The first picture shows Wanda Maximoff (Elizabeth Olsen) in her full Scarlet Witch costume sitting in front of a green screen, an image that’s instantly recognizable from the season finale — where Wanda is studiously flipping through the Darkhold after accepting her chaos magic powers. The Vision photo (with Bethany’s ears still attached) captures the awakening of the White Vision. Meanwhile, Kathryn Hahn’s photo gives us a look at the first scene where she’s dressed as the witch Agatha Harkness, perhaps even post-threatening Wanda’s sons after making a trip through the heroine’s past. The set is rounded out with an image of Teyonah Parris in her S.W.O.R.D. astronaut suit, a moment that happens immediately before the full reveal of Monica Rambeau’s powers.

The behind-the-scenes photos are well-timed given that Disney+ has just released Marvel Studios’ Assembled, a new limited series that will delve into the making of several MCU projects, with the first episode being an hour-long special about WandaVision. This is the perfect opportunity to say goodbye to WandaVision while we wait for the premiere of The Falcon and the Winter Soldier, which will drop next Friday, March 19 on Disney+. The first reactions tease an action-packed experience and a series much different from WandaVision’s unique narrative.

The first episode of Marvel Studios’ Assembled and all episodes of WandaVision can be watched exclusively on Disney+. Wanda Maximoff will also return for Doctor Strange in the Multiverse of Madness, which is set to hit the theaters on March 25, 2022. Check out the images below.

Break the fourth wall of #WandaVision with Marvel Studios Assembled: The Making of WandaVision. The Original Special is now streaming on @DisneyPlus. pic.twitter.com/MdNuFnqToc

We're flipping the script on #WandaVision 🎬 Go behind the scenes in Marvel Studios Assembled: The Making of WandaVision, an Original Special, now streaming on @DisneyPlus. pic.twitter.com/OUongMZWAh