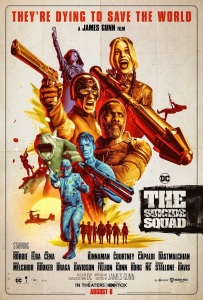 The Suicide Squad has dropped a new set of posters to celebrate the arrival of the official trailer! Director James Gunn got fans hyped yesterday with a poster for The Suicide Squad done grindhouse-style, but today Warner Bros. Pictures is dropping the full gallery of one-sheets! That includes the more traditional version of a superhero movie poster, featuring the new Task Force X – as well as a series of posters for the individual characters on the team. They’ll all be helpful after The Suicide Squad trailer drops, and mainstream viewers start asking all the questions about who some of these obscure DC Comics characters actually are!

Check out the new posters for The Suicide Squad, below!

Margot Robbie takes a third crack at playing Harley Quinn – hopefully, this one is the charm. She deserves it.

Idris Elba Steps Into the DC Films Universe with his role as a DC character you’ve probably never heard of. Name says it all, tho…

John Cena‘s Peacemaker is going to be a standout – he better be, because he already has his own HBO Max prequel series!

Daniela Melchior could be a real surprise in the film – or die way early. Who can tell?

Of course, Michael Rooker had to continue his legacy of being in every James Gunn film.

Viola Davis is still every bit a badass in this poster.