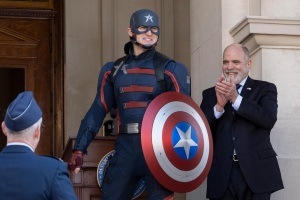 The Falcon and the Winter Soldier‘s new Captain America gets the spotlight in a new character poster. Wyatt Russell made his MCU debut as John Walker in the series’ first episode when the US government passed on Steve Rogers’ shield to the former Army man. With an ominous wink to the camera, John Walker roared into the MCU and ignited the ire of fans who miss Chris Evans‘ original Cap. Those feelings were only exacerbated by Russell‘s performance in the series’ second episode.

With Sam and Bucky together at last, “The Star-Spangled Man” saw the pair hot on the trail of the Flag Smashers thanks to first lieutenant Joaquin Torres’ recon work in the first episode. With Sam and Bucky outnumbered and realizing their opponents are actually all Super Soldiers, John Walker arrived on the scene to help save the day. Walker spent the rest of the episode trying to convince Bucky and Sam to work with him in the hopes that they could take down the Flag Smashers together, but by the end of the episodes, hopes of an alliance have been dashed.

It seems like Walker will be persistent in his search for the Flag Smashers, and he’s sure to run into Bucky and Sam again. With his full-length debut finally released, Marvel Studios has released a character poster for John Walker. Walker is decked out in full Captain America regalia, holding the coveted shield in the shot. A quote from the episode acts as the caption of the poster, with Walker says, “Everybody in the world expects me to be something and I don’t want to fail them.”

"Everybody in the world expects me to be something and I don't want to fail them." Meet John Walker in the latest episode of Marvel Studios' The Falcon and The Winter Soldier, now streaming on @DisneyPlus. #FalconAndWinterSoldier pic.twitter.com/sgn7MIi3fm

While fans may not be taking to the MCU‘s new Captain America, that’s obviously the point. Russell is doing a great job at both adding depth to his character and the various pressures he’s facing while simultaneously acting as a sort of foil to the beloved Steve Rogers. Inevitably, the pressure will get to John Walker, as indicated by set videos that show a violent confrontation that is the antithesis of what he stands for as Captain America. How soon he gets there remains to be seen.

With Sam and Bucky potentially stealing Cap’s shield again, John Walker, Bucky, and Sam will face off against each other at some point during the series’ run. What that means remains unclear, and how long John Walker will remain on the government’s good side is a mystery, but with only four episodes left in The Falcon and the Winter Soldier, it’s likely to happen pretty soon. This is likely to culminate in Sam’s introduction as the new Captain America, but first, he will have to reckon with the shield and the symbol’s complicated history.