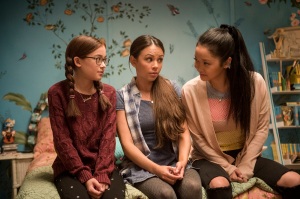 Netflix is reportedly developing a spinoff TV series based on its To All the Boys I’ve Loved Before trilogy. According to Deadline, To All the Boys alum Anna Cathcart, a.k.a. Kitty Song Covey from the original films, will be the protagonist of the spinoff series. The original author of To All The Boys novels, Jenny Han, is on board to write, create and executive produce the series that is said to be a half-hour romantic comedy following Kitty on her journey to find true love. Awesomeness and ACE Entertainment, the studio behind To All the Boys: Always and Forever, are behind the project.

In the original film, Cathcart’s Kitty played a significant role as the little sister to main character Lara Jean Covey (Lana Condor). In the first film, Kitty is the catalyst behind the movie’s story after she finds old letters that her sister Lara had written as a shy high school junior to guys she had a crush on. After secretly mailing them, Kitty inadvertently roped Lara into an unexpected romance with Peter Kavinsky (Noah Centineo). Throughout the final two films that followed, Kitty becomes a spunky teenager who throws out zingy one-liners and even ends up in her first relationship.

During a virtual junket for To All the Boys: Always and Forever this past February, Cathcart sort of teased at this development in an interview, saying:

“In the first movie, Kitty is definitely just the little sister. She’s in middle school and she’s young, and she’s there to be the pesky little sister to Lara Jean. And in the third movie, you start to see her go onto her own path, where has her own small little romance and she’s going through these things. She has so many good role models in her life, with Margot and Lara Jean, and you definitely get to see Kitty grow up a bit. That was really special for me to experience, but also for fans to see.”

The franchise founded massive success after 2018’s To All The Boys I’ve Loved Before, even being touted as one of the most viewed original films on Netflix with intense repeat viewing. Kitty’s character was also well received by fans, being called a “scene-stealer” in most cases, so it is no surprise she landed her spinoff series following To All The Boys’ success.

Not much is reported about the plot or cast of the series. However, fans can rest assured that whatever the studios have up their sleeves is likely guaranteed to appease young adult film fans. Stay tuned to Collider for more upcoming information on the exciting Netflix spinoff.