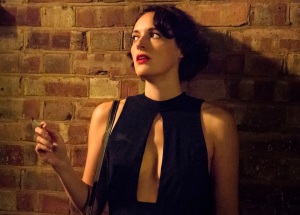 Indiana Jones has crashed through a lot of walls in his adventuring days, but has he ever broken…the fourth wall? Phoebe Waller-Bridge, the brilliant writer/director/actor behind Fleabag and Killing Eve, has landed the co-lead in Indiana Jones 5 alongside Harrison Ford. As previously reported, the film will be directed by Logan helmer James Mangold, marking the first Indy adventure without Steven Spielberg in the director’s chair.

“I’m thrilled to be starting a new adventure, collaborating with a dream team of all-time great filmmakers,” said Mangold in a statement. “Steven, Harrison, Kathy, Frank, and John are all artistic heroes of mine. When you add Phoebe, a dazzling actor, brilliant creative voice, and the chemistry she will undoubtedly bring to our set, I can’t help but feel as lucky as Indiana Jones himself.”

Waller-Bridge shot to superstardom thanks Fleabag, the adaptation of her own one-woman show for BBC and, later, Amazon Prime. Season 2 of the fourth-wall-breaking dramedy took home both Outstanding Comedy and Leading Actress in a Comedy at the 2019 Emmy Awards. In between, Waller-Bridge lent her voice to the Star Wars universe, playing L3-37 in Solo: A Star Wars Story. Most recently, the award-winner contributed to the script for No Time to Die, the 25th entry in the James Bond franchise.

Indiana Jones 5, which will see Ford take on the title role at the age of 78, is scheduled to start shooting in the spring. Spielberg is still onboard as executive producer, with Lucasfilm‘s Kathleen Kennedy and Frank Marshall producing as well. Collider spoke to Marshall not too long ago, who told us why Mangold was the perfect choice to take over:

“His love of the franchise. He’s a wonderful filmmaker. I think he also has a relationship with Harrison. It was all of the right pieces coming together, at the right time.” And with Spielberg staying involved, Marshall said, “we’ve got the best of everything.”